Most of us have known at least one set of twins. You remember them as the poor souls who had to be dressed the same in elementary school, and then once you all got to high school, they had that twin telepathy we all find equal parts fascinating and freaky.

No, identical twins are born with the same hair color.

Identical twins are called ‘identical’ for a reason. If they were born with different hair colors, eye color, ear lobe size, or any other genetically governed physical feature, they wouldn’t be identical.

So, if you’re asking if they can be born that way, the answer is no. But can Mary dye her hair purple and Martha leaves hers her natural brunette? Sure.

But I Know Twins and Can Tell Them Apart

First off, good for you. I’m sure they appreciate that. If they’re fraternal twins, then that’s no big feat. If they’re identical, that’s a neater trick.

But let’s talk about those two terms because even in the 21st century, we still find people who don’t know the difference or what “fraternal” means. 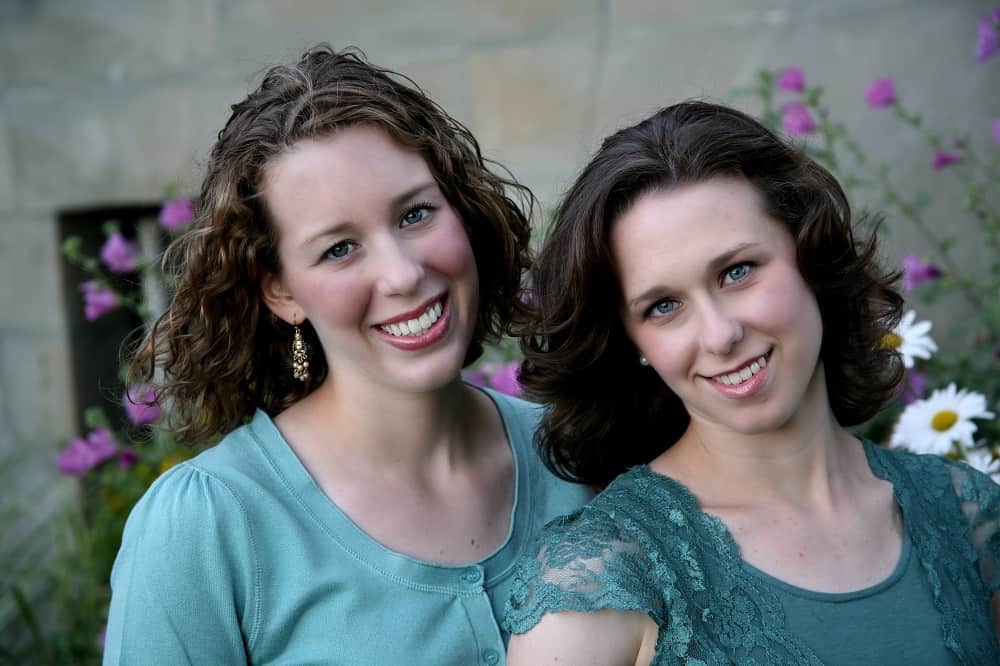 Fraternal twins are created when their mother’s ovaries release more than one egg at a time, and then two of those eggs are fertilized by two different sperm cells.

Because they come from two eggs, fraternal twins are called dizygotic twins. There are several reasons why a female might hyperovulate, some natural and some hormone-induced.

Each twin will share a mix of her mother’s and father’s DNA, but those twins are no different from any other set of two siblings. Fraternal twins can be of different sexes, and those two kids would be the same as any other brother and sister pair who wasn’t born on the same day. 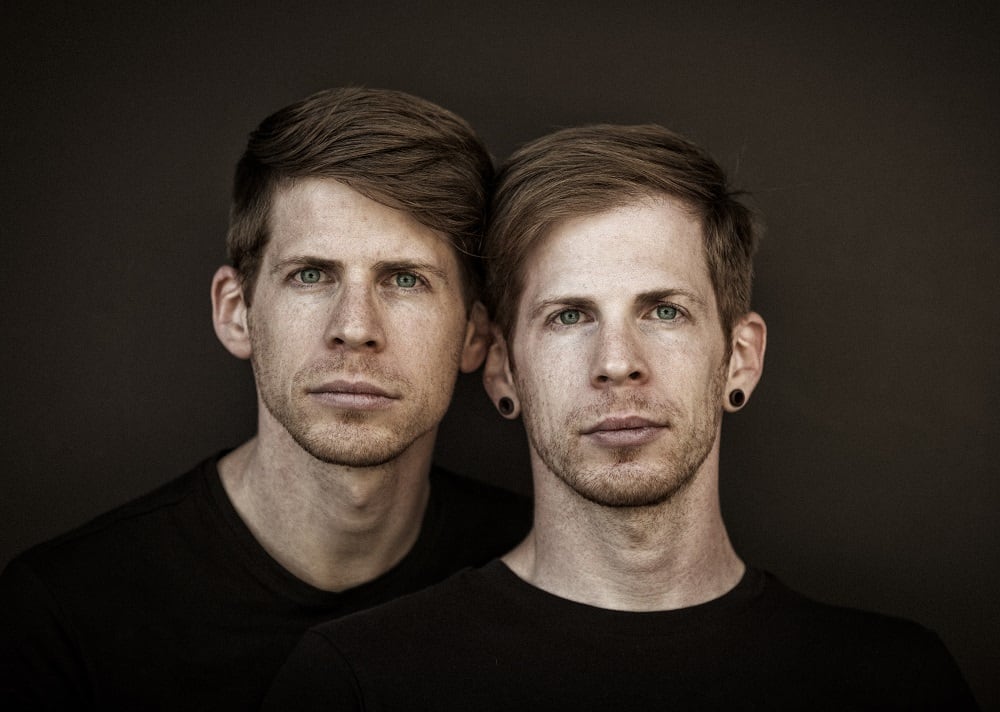 Identical twins are monozygotic, meaning they stem from one egg fertilized by one sperm cell. The resulting zygote, which usually grows and develops into a baby, splits itself in half first, making itself into two identical zygotes, which then grow into two identical babies. Oh, and this is fun: scientists have no idea why the zygote splits.

Anyway, because monozygotic twins came from one fertilized egg, their DNA is the same. Exactly. That is why they are identical twins. They will have the same eye color, and their noses will be the same shape because genetics determines these things.

Why Do Some Identical Twins Look Different 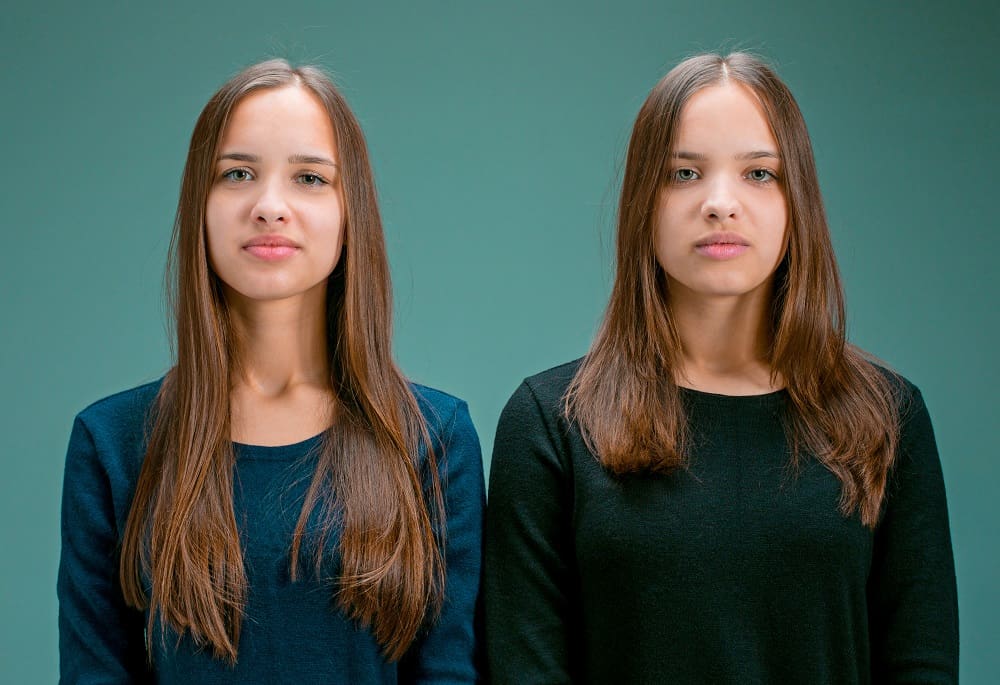 Environmental factors affect our appearance, and since these are not genetic issues, they can alter how twins look (or don’t look) alike. These epigenetic changes are how our environments can affect us.

For instance, in the 17th and 18th centuries, cooler temperatures worldwide shortened the food growing seasons, so there was less food. Without proper nutrition year-round, growing to 5’6” was out of the ordinary. Those people’s DNA didn’t prevent them from growing six feet tall, but epigenetic changes did.

My mom and aunt, identical twins, have diverged so extremely on how they practice self-care that they do not look much alike anymore. Environmental factors have worked their magic, and why my mom and aunt share the exact same DNA, they have lived in ways that have altered how that DNA gets expressed in them.

Another example of environmental factors changing identical twins’ appearances is NASA astronauts Scott and Mark Kelly. Scott spent one year in space while Mark stayed on earth. When Scott returned, he was taller than Mark because gravity hadn’t been compressing his spine. However, there were some subtle changes to Scott’s DNA, including the length of his telomeres.

The changes in Scott’s DNA were subtle, yes, but significant enough that after he got back to earth and his body readjusted, NASA said he and his brother were “back to being nearly identical.” Weird.

The Kelly brothers don’t have any hair, so we’ll leave them for now. My mother has salt-and-pepper hair, while my aunt is completely white-headed. Again, lifestyle differences can explain this different hair color, just as hair dye explained when my mom was salt-and-pepper and my aunt dashed around town with jet black hair.

Of course, identical twins can color their hair differently from dyes and lifestyle differences. But if one twin was born with a hair color different from their sibling, they are not identical twins.

Later in life, environmental factors may affect how twin genes continue to express themselves, but you’re not going to have one twin with thick, curly, coarse black hair while her identical sister has wispy, gossamer white-blonde locks. Those would be fraternal twins.

More Interesting Topics for You: