Over the past few years, fade haircuts have gained a lot of popularity. Among them, the burst fade Mohawk may be the most famous. This burst haircut is also known as the South of France hairstyle.

A famous singer Usher Raymond introduced this hairstyle, after which it became widely popular throughout the world. The burst fade puts a twist on the classic Mohawk worn in the past. 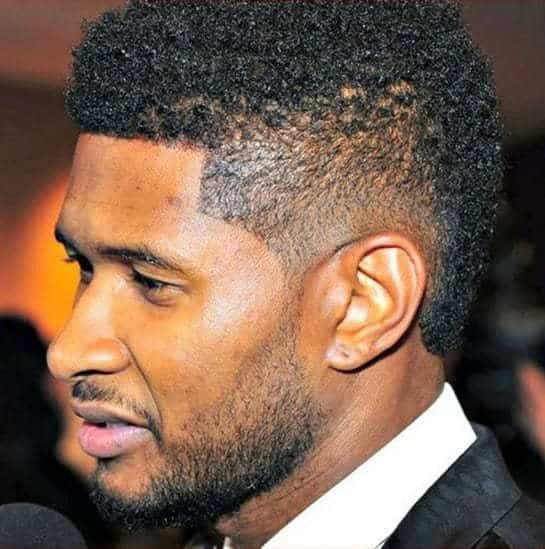 The classic Mohawk was merely a strip of hair in the middle of the head. On the other hand, the burst fade with Mohawk is much more. It is essentially a taper fade mohawk that curves around your ears.

The term ‘burst fade’ comes from the fact that the fade bursts outwards as it approaches the top of the head and the neckline. So, the length of your hair gradually tapers away.

How to Get Burst Fade Mohawk 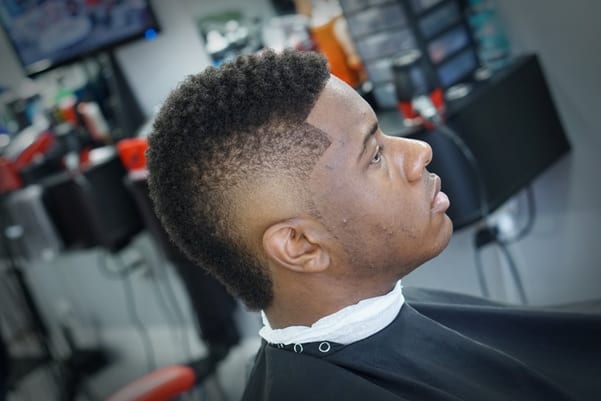 Of course, we recommend that you go to a barber to get a burst fade Mohawk cut but if you think you have the relevant expertise then you can try it yourself. You’ll need clippers with guards to achieve the burst fade hair with Mohawk.

Start to trim the portion around your ears, here you can use a bald trimmer because you want to trim as much as possible. Following the shape of your ears is very crucial to achieve the burst haircut with fade and Mohawk.

Once you’re done, blend all the sections together and you’ll have the desired haircut. This mohawk style is a great option for black guys.

There are several options for burst haircut and it gives the best look with the combination of fade and mohawk. Have a look at these top 22 styles: 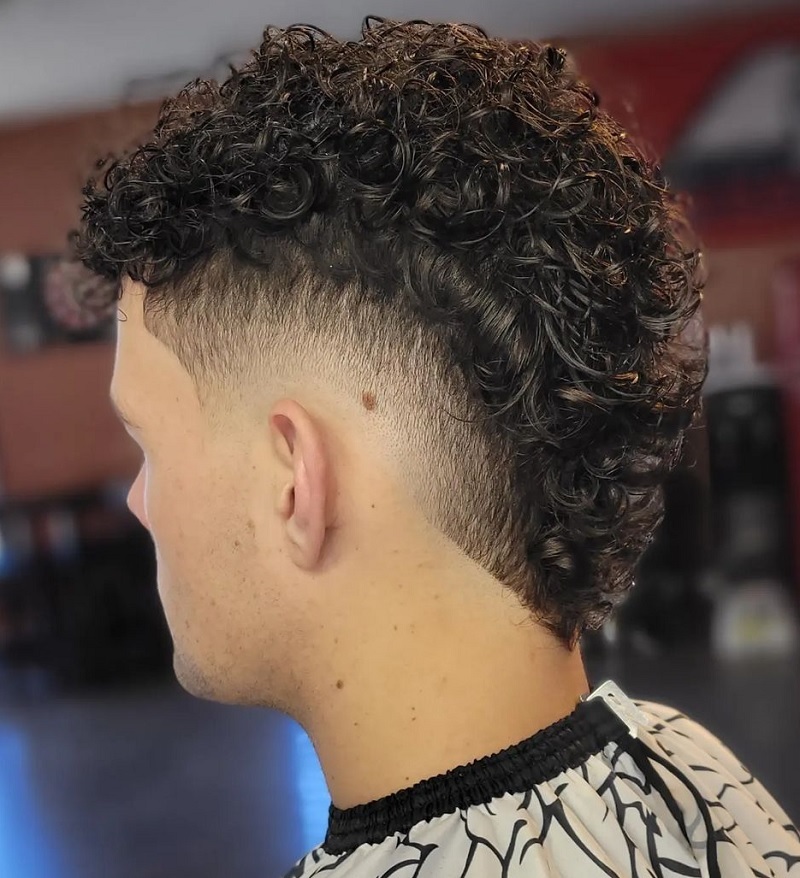 Show off your curls with this cool burst faded mohawk hairstyle. The fade circles around the ears and merges into the longer top. The pointy line up at the back keeps the look neat and clean. Use styling gel to retain the curls in place. 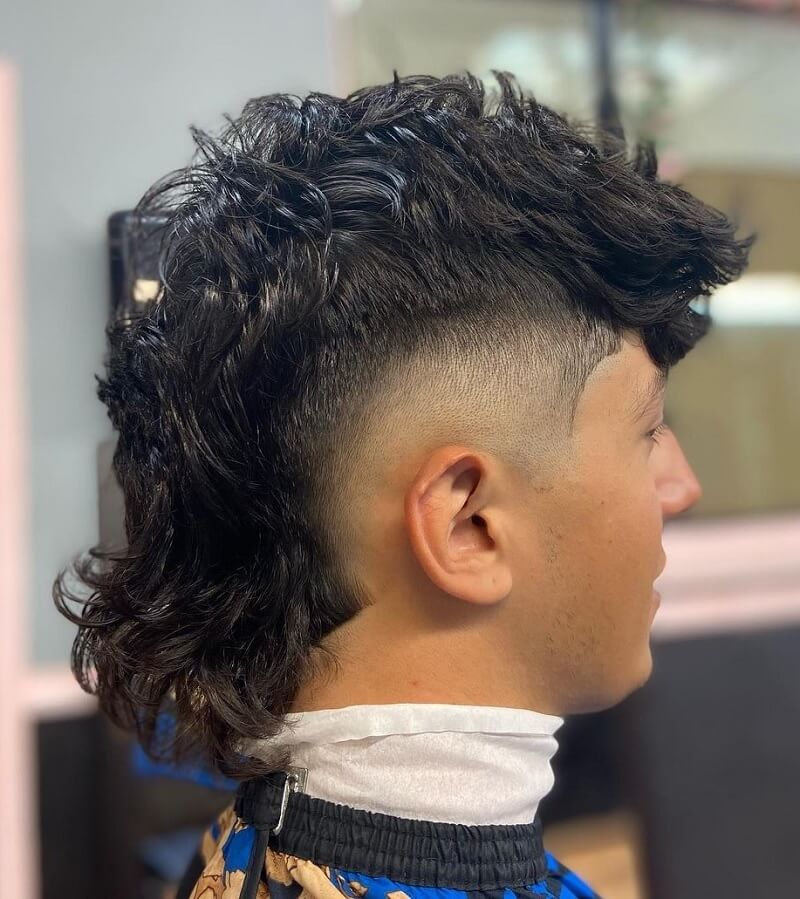 Combine a mullet haircut with a mohawk to create this look. The sides are burst taper faded exposing the skin with a neat line up. The top is kept long and shaggy with the longest front and back hair falling on the forehead and neck, respectively. 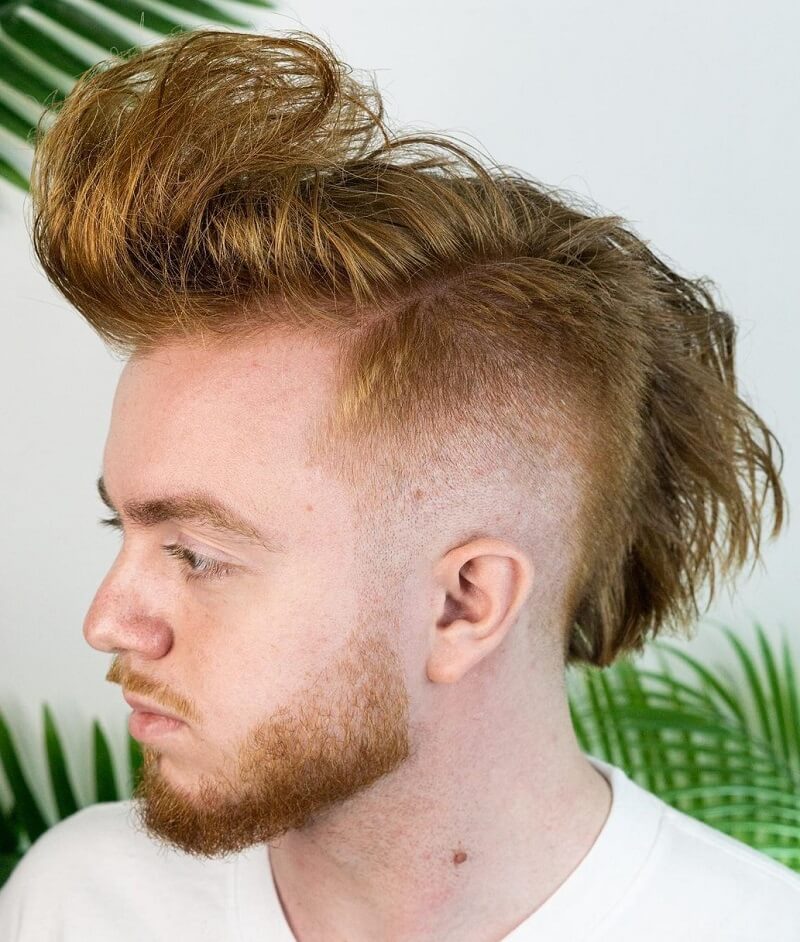 For men who want to show their hipster side, this is the hairstyle to go for. The long top is side-swept and tousled. The front strands are the longest and brushed up in an unkept manner. Pair the look with a neatly trimmed beard to top it off. 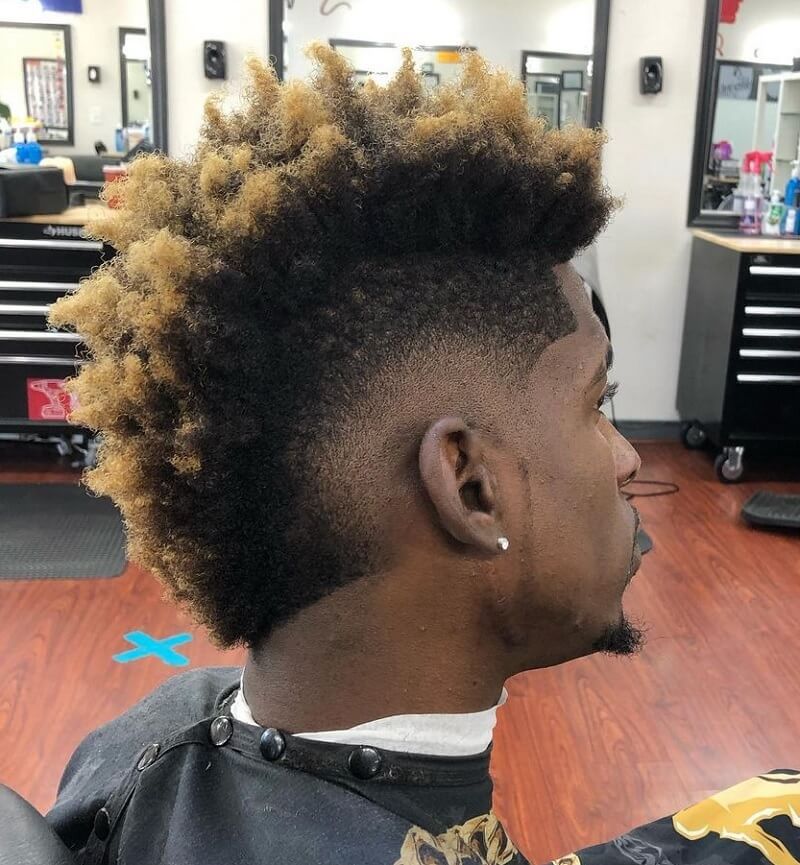 Amp up a Mohawk hairstyle by adding highlights to it. Couple an undercut with burst faded sides and longer afro curls at the top. The tips of the curly strands are dyed in a honey blonde hue. Grow an anchor beard to finish off the look.

Rock a Mohawk in its original bohemian form for a 90’s-inspired look. The long top extends to the back into a V-shape. The faded sides expand to the temples while the hairline is kept natural. Use pomade to create edgy spikes along the centre. 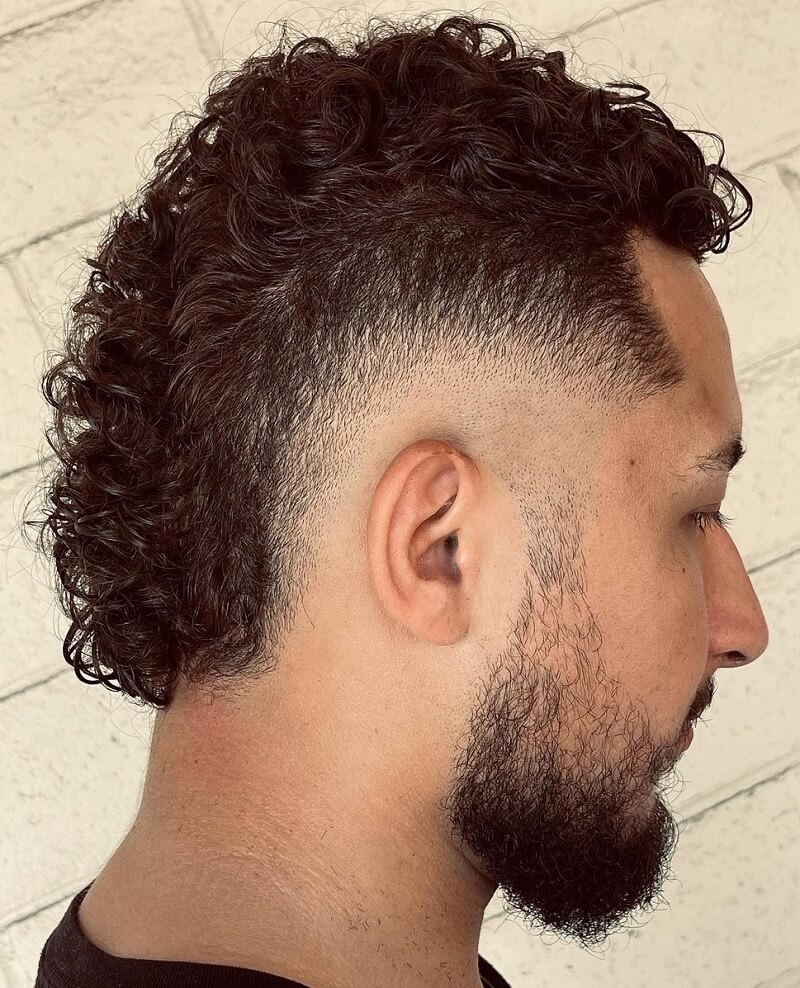 A burst fade Mohawk looks the coolest with messed-up curls. The balded sides keep the attention on the top which is wide and short. Let the strands curl up naturally in all directions and grow out a ducktail beard to accentuate this low-maintenance look. 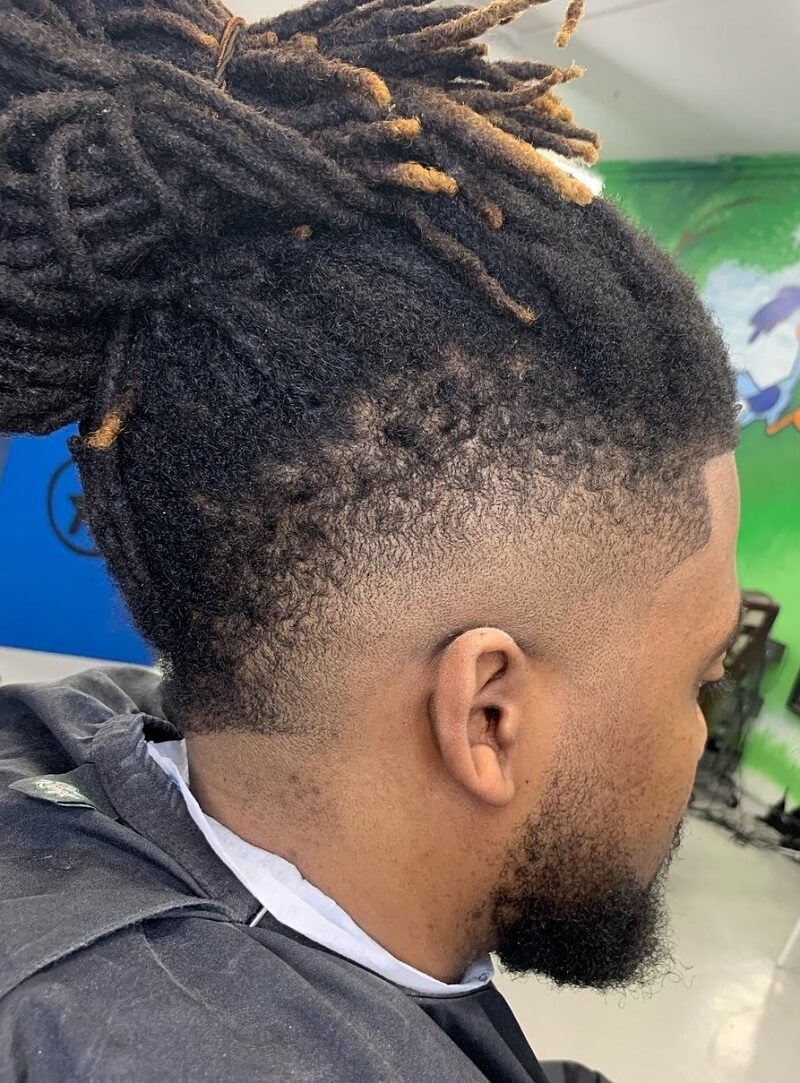 Go an extra length with your mohawk to stand out in the crowd. The long strands are dreaded with blonde highlighted tips and are tied up in a hair tie. The sides are burst faded to contrast the longer top. A curly textured beard completes this look. 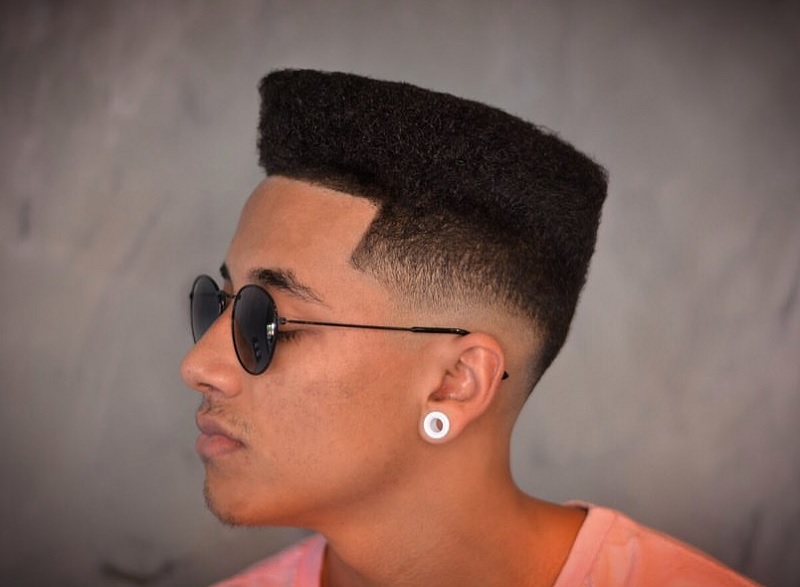 This edgy look is ideal for men with finely coiled strands. The top is long and flat with a fade circling around the ears and exposing the skin. A neatly shaped hairline keeps the style neat and tidy. 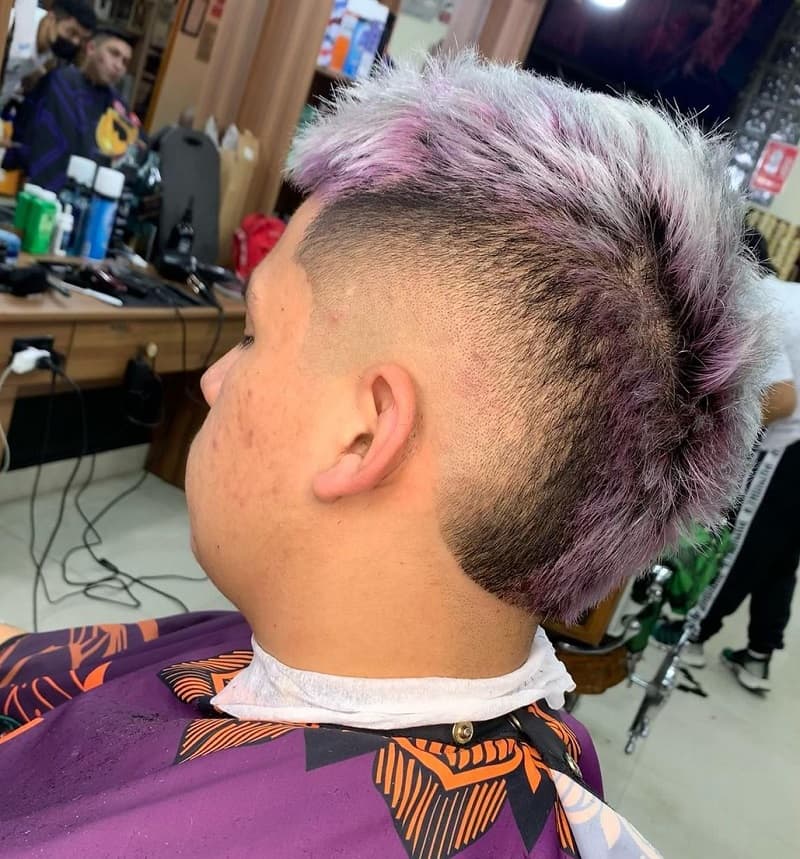 Carry the South of France haircut with a twist. Bleach down the strands of the mohawk and dye them in a lilac hue to contrast with the burst fade along the ears. A subtle line up keeps this funky look neat and tidy. 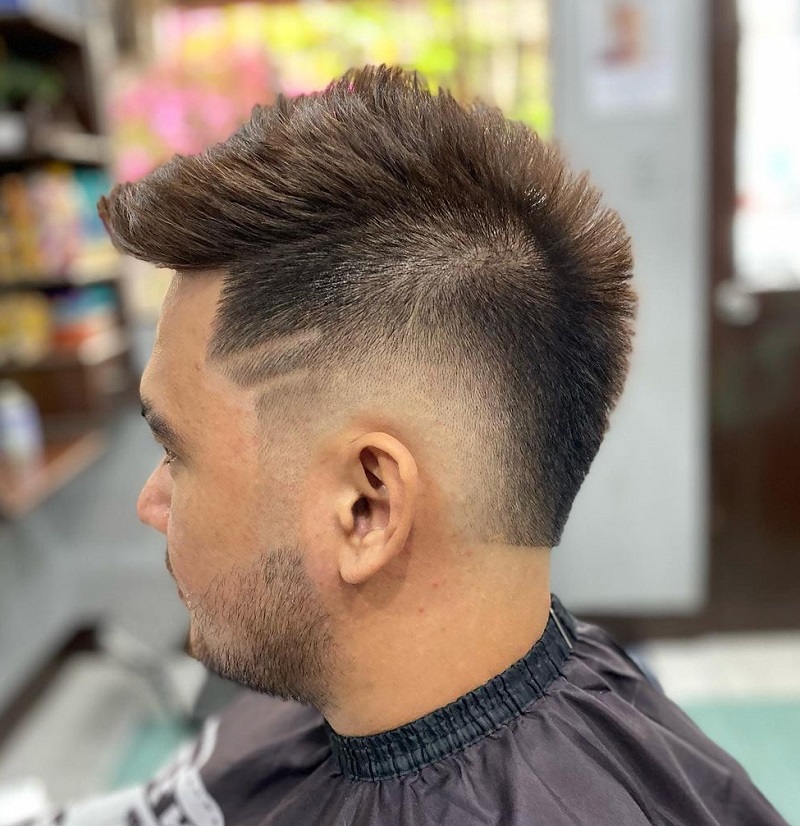 This badass haircut features a mohawk on naturally straight hair. Beef up the style by getting two shaved slits along one or both the temples that contrast with the sides. This look is ideal for men with fine hair. 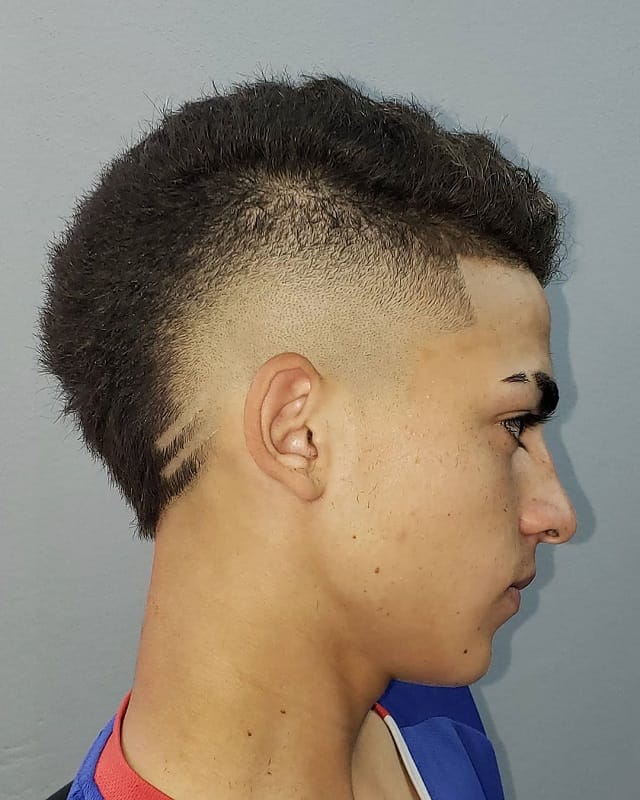 To really edge up your mohawk, give the burst fade a shaved design. This look features two shaved block lines, but you can choose whatever your heart desires. 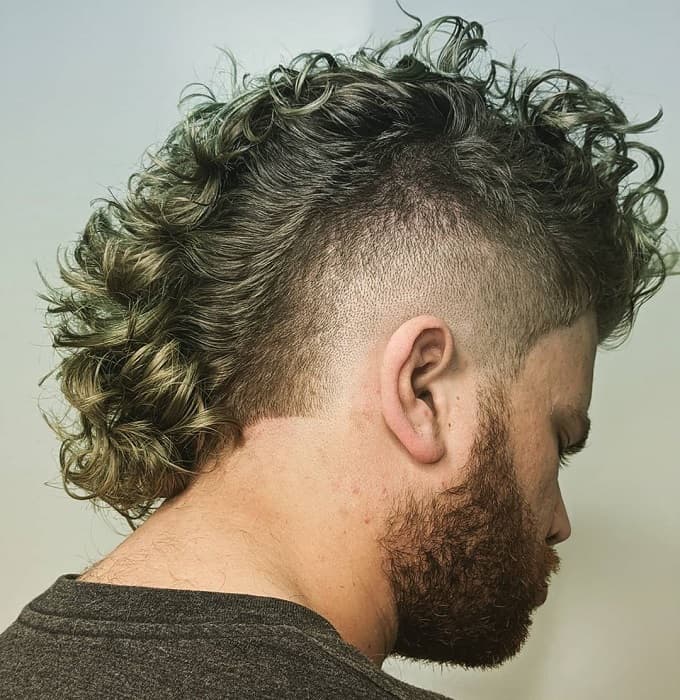 Combine color and curl on a burst fade mohawk for a design you’ll never tire of. A muted green works well for many skin tones but highlights would look handsome as well. 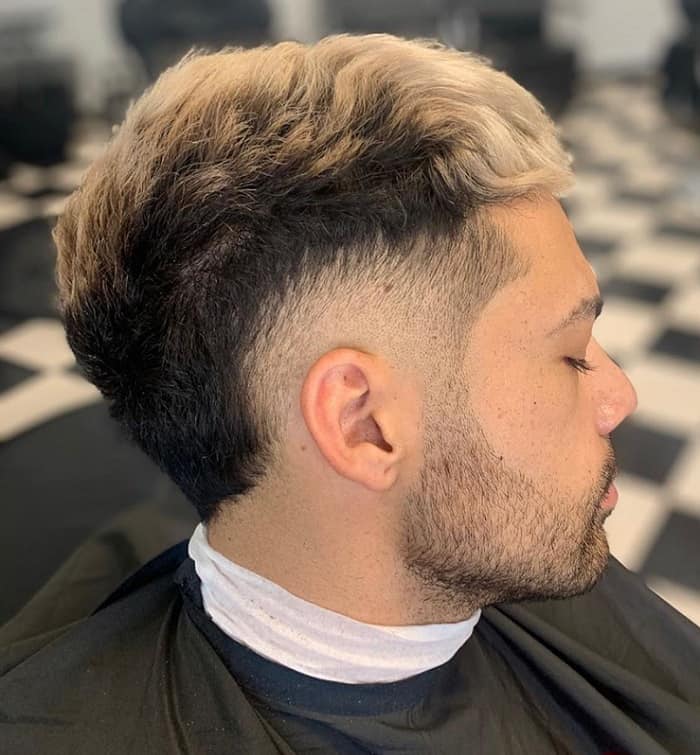 Highlights will pop on a brunette burst mohawk fade. Keep the style from becoming too skunk-looking by adding highlights in chunk at the front and fading it as it goes backward.

Among all the types of fade haircuts, this one of the most unique cuts. You can style your burst Mohawk fade in a number of ways. While the look originally kept even the hair on the top a relatively low length, that is no longer the case. More and more new renditions of the Burst Fade Mohawk keep popping up, with longer hair on the top like this particular style. 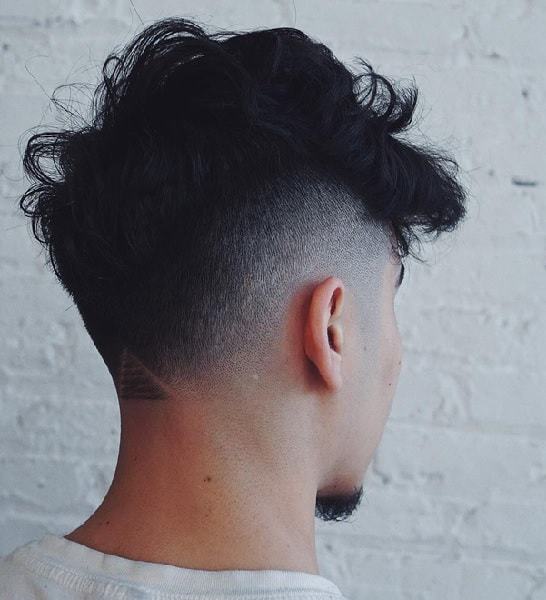 Another type of burst fade hair with Mohawk incorporates wavy hair at the top, and shape cut out at the neckline. It’s sort of a ‘hipster’ rendition of the look. It’s also very easy to maintain, just trim your hair if you feel like they’re getting too long. To style, it uses a serum or a sponge to give it curls, waves or even spikes. 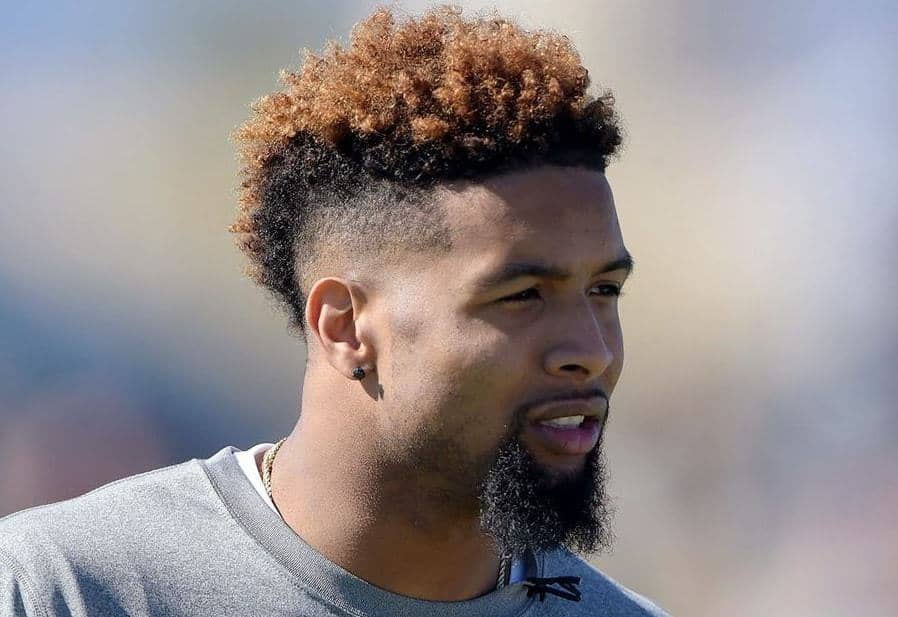 Show off your sexy natural hair’s texture with a burst fade mohawk. While most of the color is black, a light red or even blonde will liven the look up. 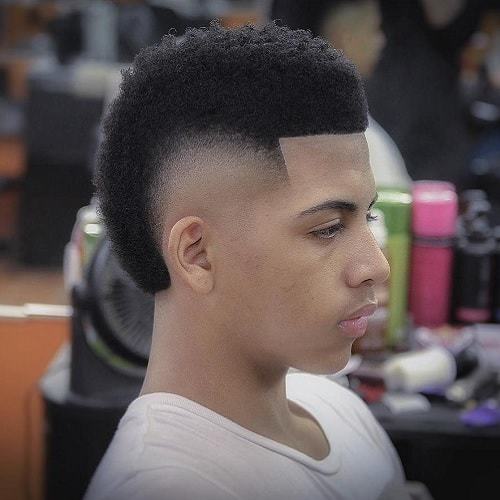 Do you want your look to always be on point? A line-up will keep you looking fresh and edgy when paired with a burst mohawk fade. 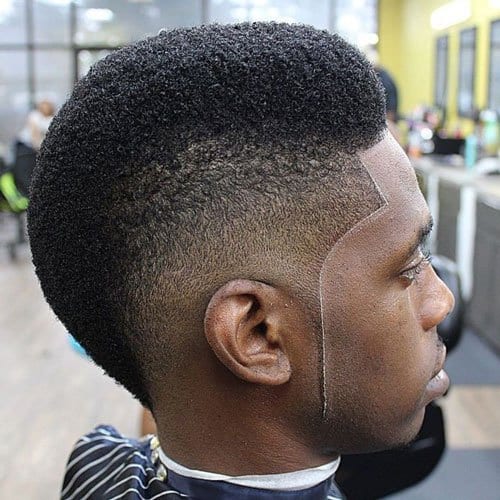 While most mohawks feature spiky hair or some kind of texture, this one has a rounded shape. The look is low maintenance and full of detail. 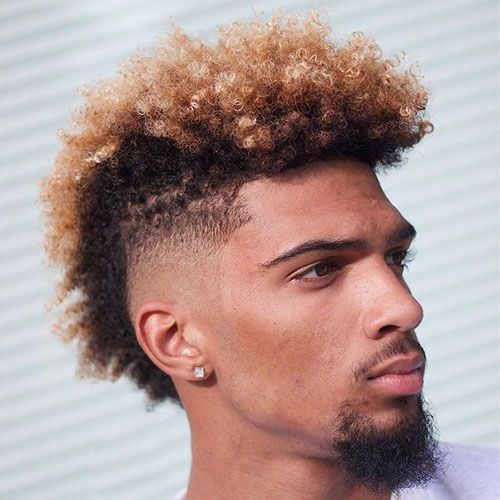 Don’t chop off those kinky curls of yours – let them grow to mohawk length, then add blonde highlights and a burst fade. 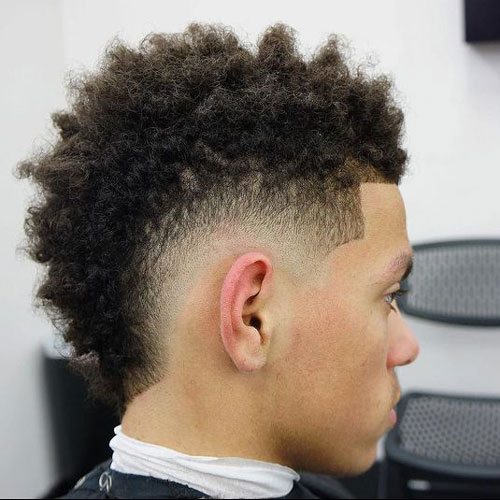 Most of the time, bedhead is rarely attractive. But combine the messy look with a burst fade mohawk and a sharp lineup and you’ll be able to pull it off. 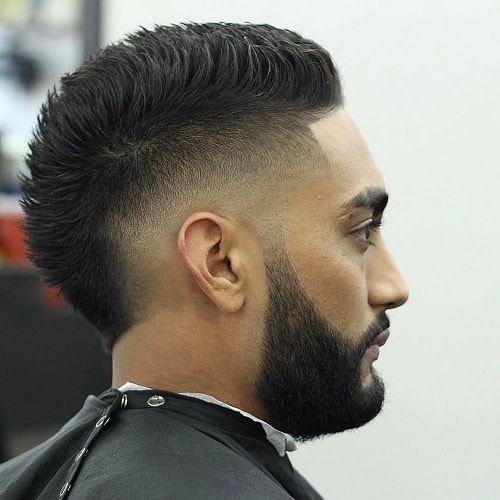 Men with thick hair will definitely want to try this piecey mohawk with a burst fade and trim-shaped facial hair. 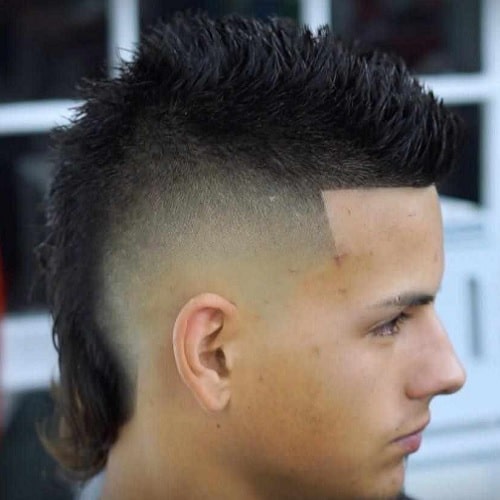 Mix the best of both worlds by combining long and short hair into one edgy burst fade mohawk.  The front half of the mohawk is short while the back makes a statement with mullet-length locks.

The burst fade Mohawk continues to be a wildly popular haircut all over the world. This is because the look is versatile enough to be worn in numerous ways so it can incorporate everyone’s personal style.