Anime boys with blue hair are not a common feature. It is one of the rare colors, but the characters who wear them often represent special characteristics. Blue as a color represents peace, tranquility and natural balance.

Though most of the anime characters on the list may not be depicting the exact features, their outward calm and poise deserve special mention. The appeal and charm of their anime personalities put them a step ahead of the rest. Here is a quick lowdown on some of the most striking ones.

Here we have put together the top 21 anime characters that made blue hair so appealing for guys. 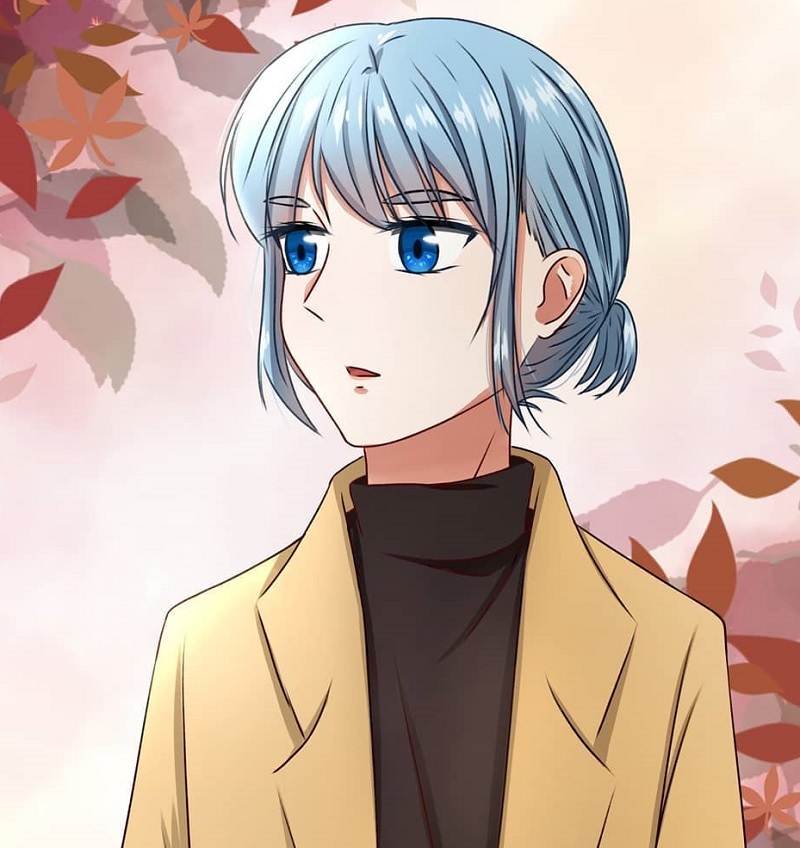 The principal character of the Tower of God series has a short powder blue-colored bob full of layers dangling above the shoulders. Aguero’s short strands are tied back in a low ponytail and accentuated by the wispy bangs at the front with chin-length side locks. 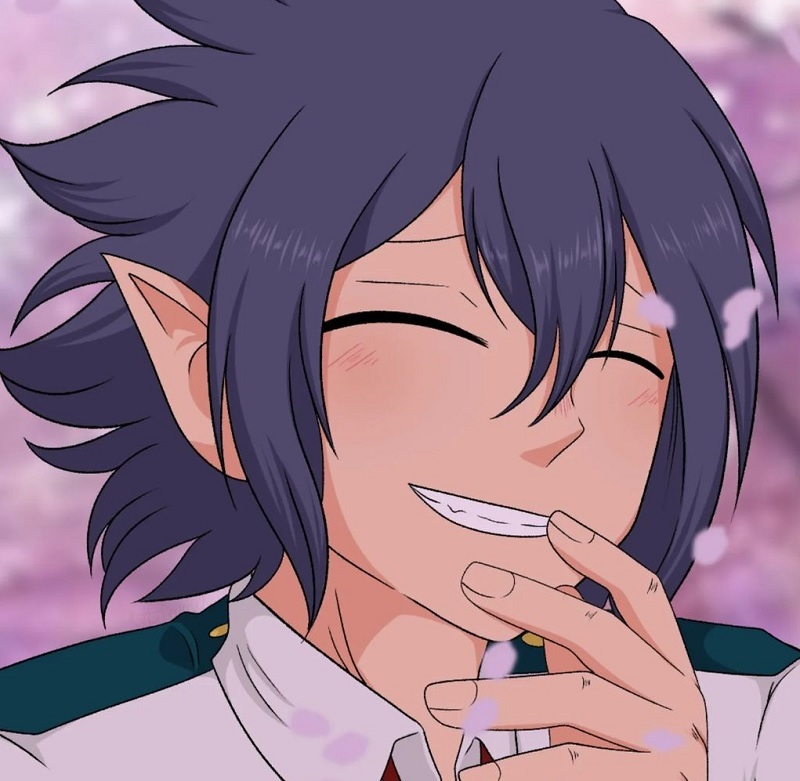 Tamaki Amajiki displays his shy and depressed personality with his dark indigo hair. The strands are spiked up at the back and coupled with a front fringe that is layered and parted for a clear vision. 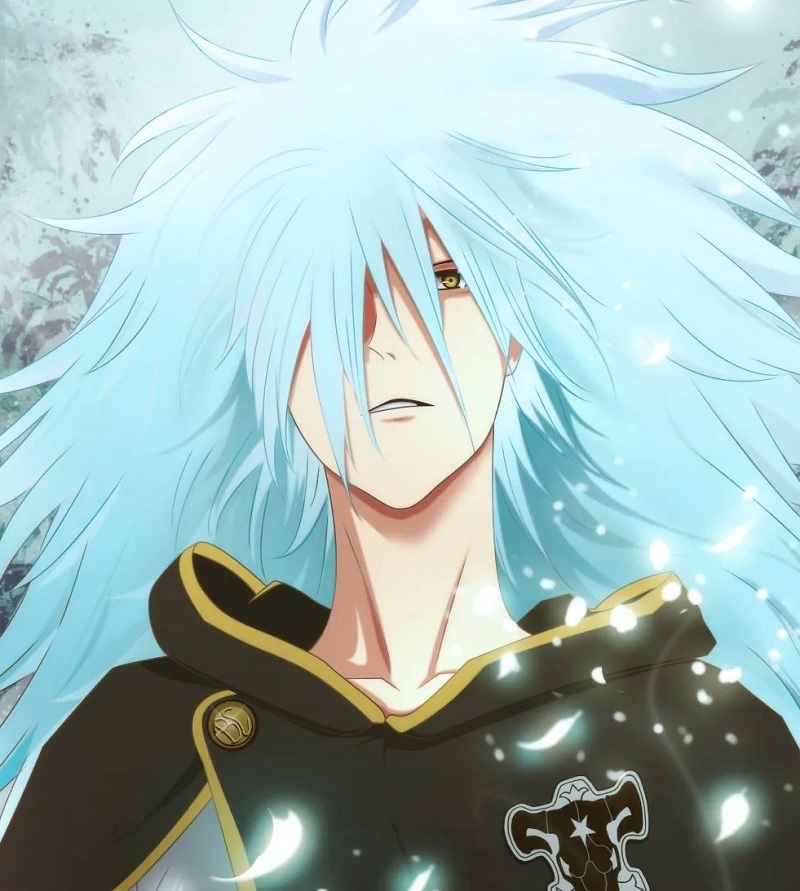 This mystic character of the Manga Anime series has long white locks reaching the knees with a hint of blue. Henry’s hair is roughly layered and un-kept to resemble a bird’s nest. The front strands falling on the face complete the look. 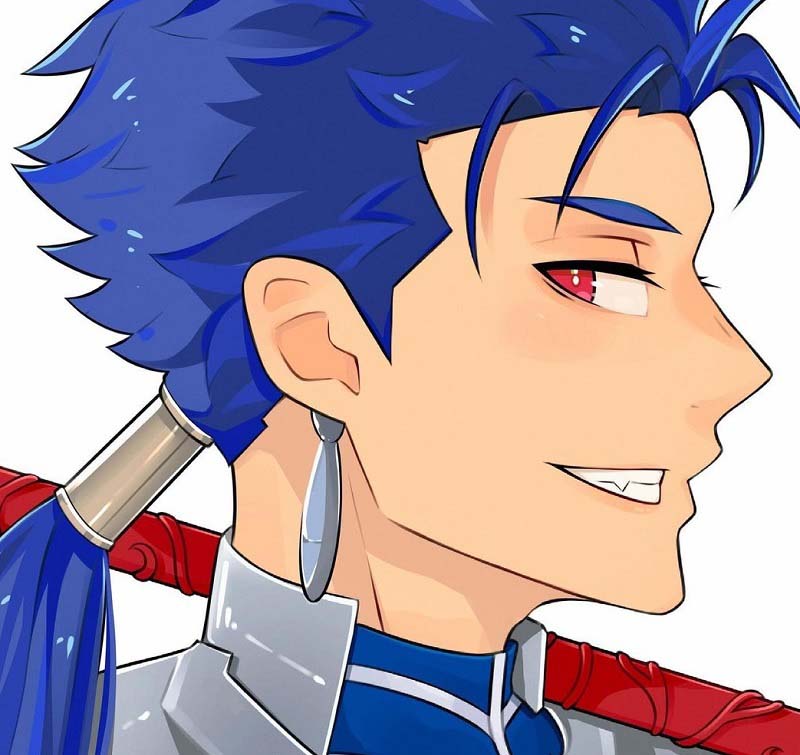 Lancer is a courageous young anime boy with bright cobalt blue-colored hair. The strands are short and spiky all over the head except for a thick chunk of hair at the back that is long and tied in a low ponytail. 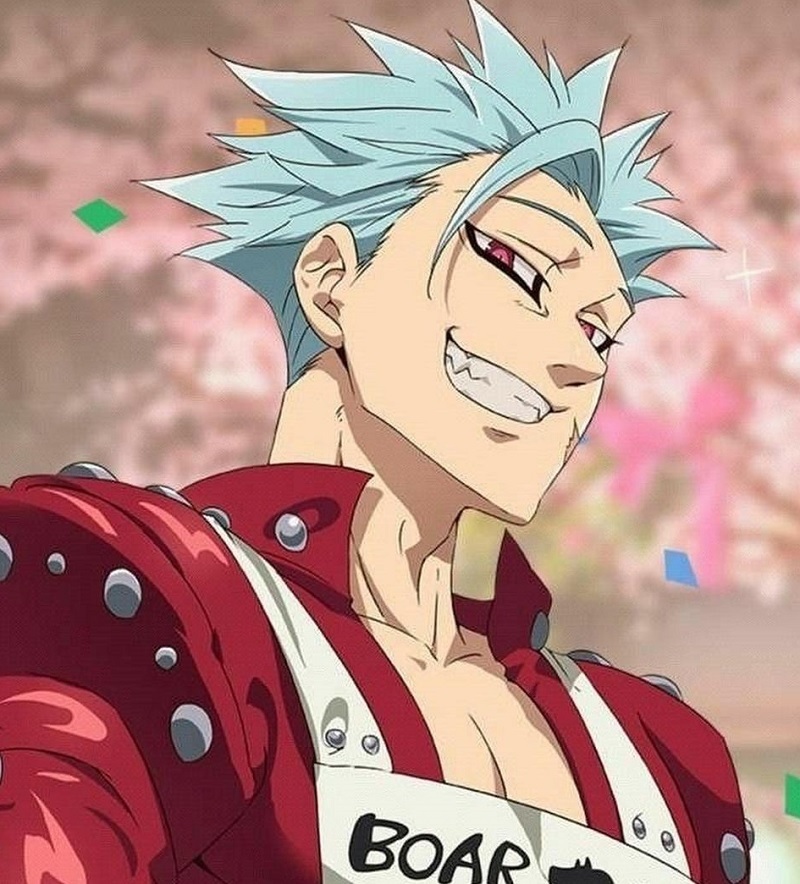 Ban is one of the coolest anime boys with blue hair. This Seven Deadly Sins character has his pale blue hair styled into chunky spikes with pointed ends. A single tuft of hair falling on his cheek sets off the hair look. 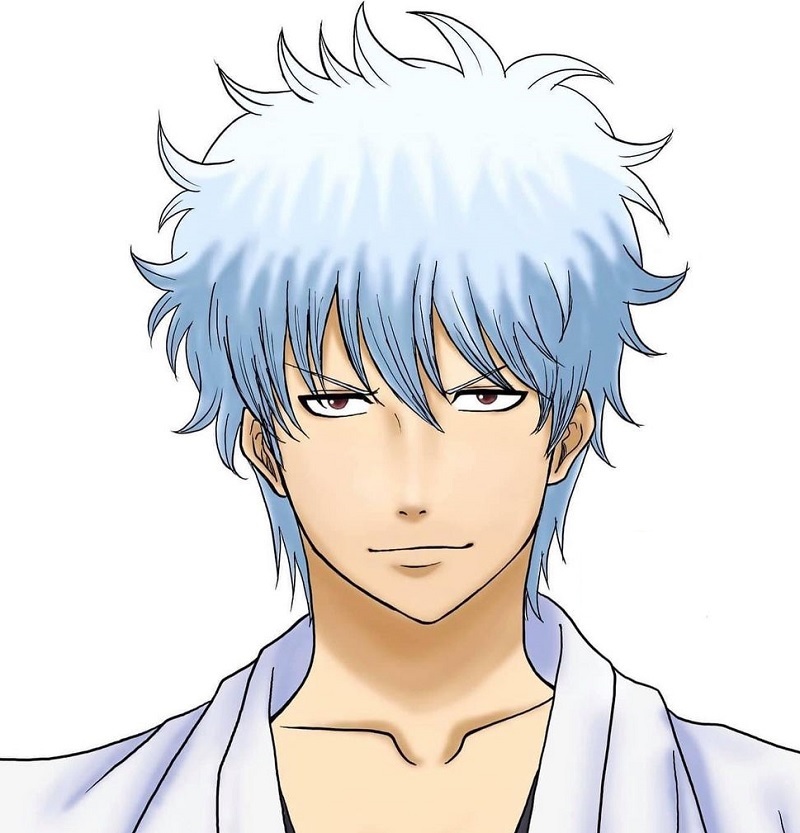 Gintoki Sakata from the Gintama series has natural wavy locks that are styled into a tousled choppy shag. The strands are short at the top and sides while longer at the back. The cool blue hair shade lightens gradually into a silvery hue at the top. 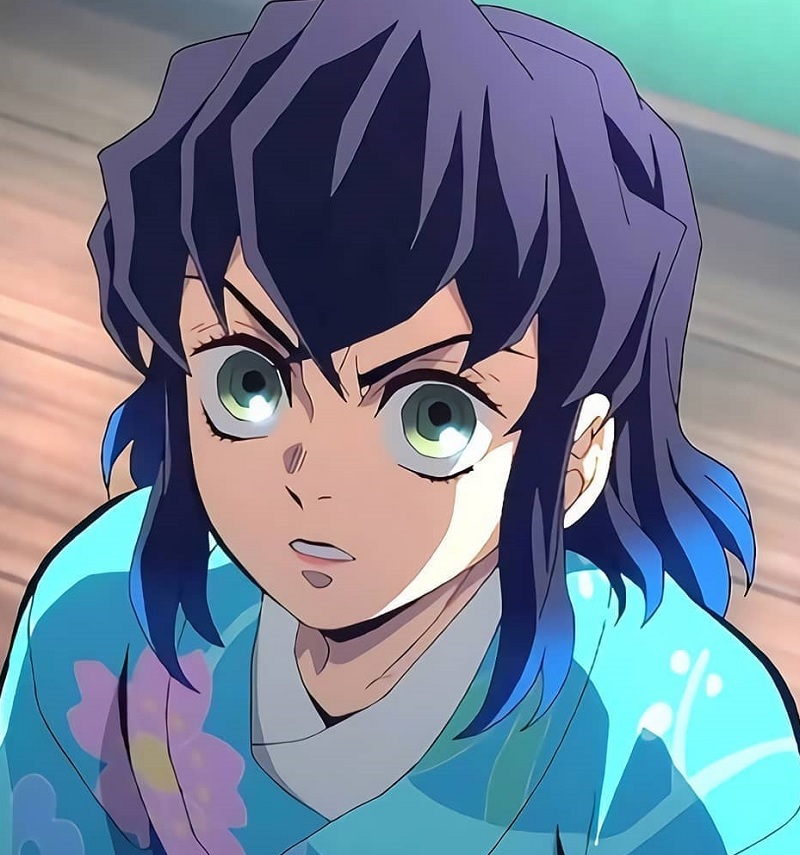 The hero from the Demon Slayer series rocks a dark to light ombre hair look confidently. The shoulder-length locks are subtly layered with a front fringe having chunky strands crossing over in the middle. Inosuke’s dark midnight blue hair shade lightens into an ocean blue hue reaching the ends. 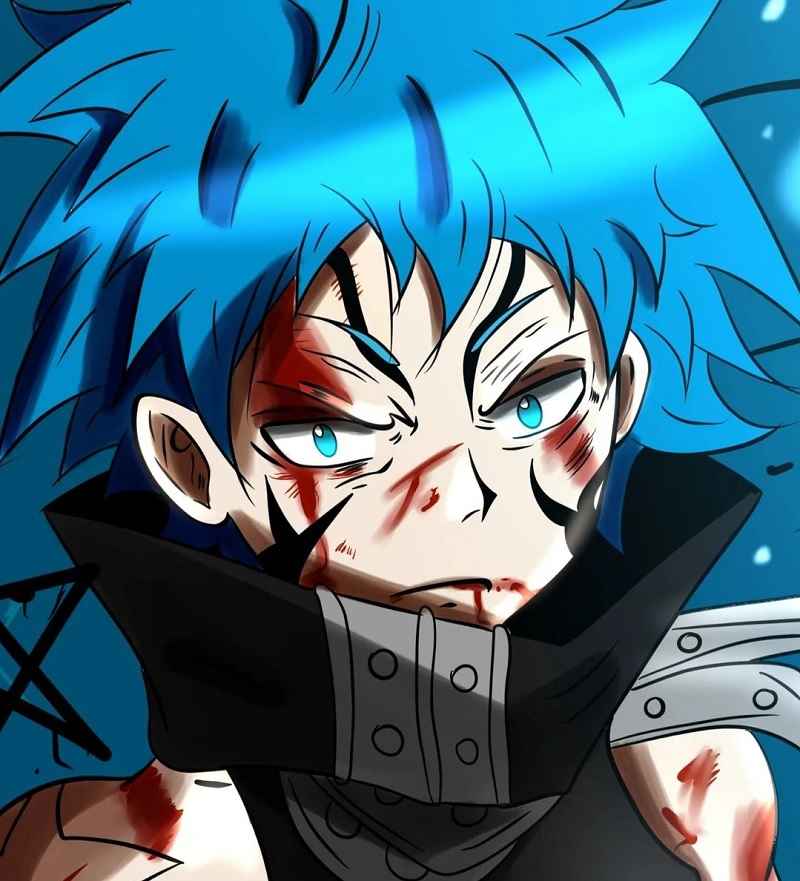 Black star is known for his arrogance but unlike his name, his hair is not black rather it is tinted in a bright electric blue hue. His layered strands are styled into spikes and stick out in a way to resemble the shape of a star. 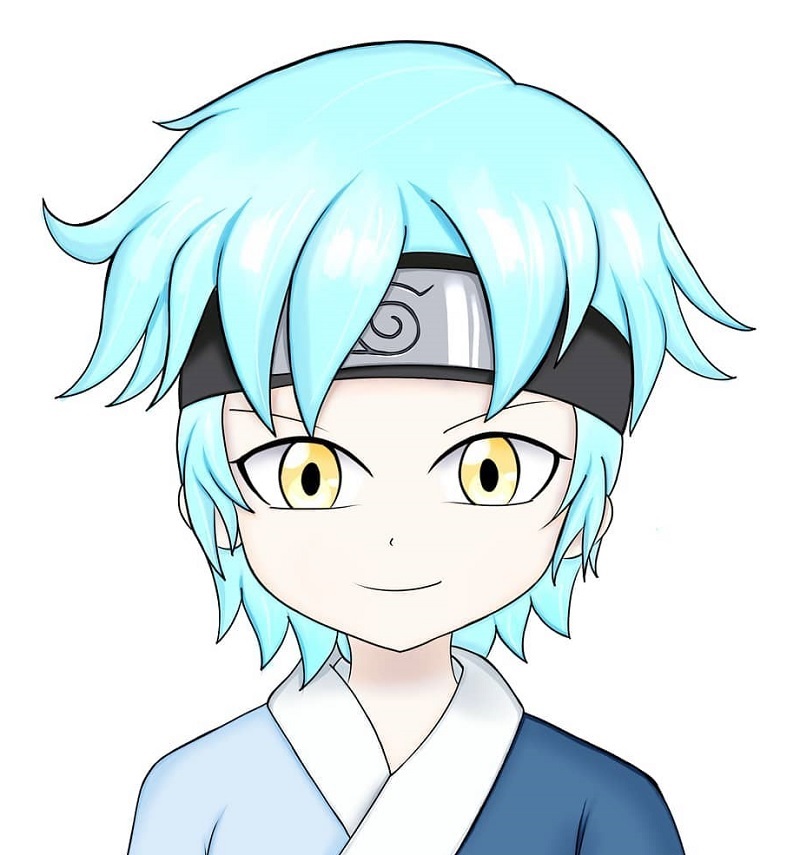 This cute-looking anime boy has a hairstyle that is all about ruffled layers and pointy spikes. The hair is colored in an icy blue shade with the front strands falling over a grey headband to top off the overall look. 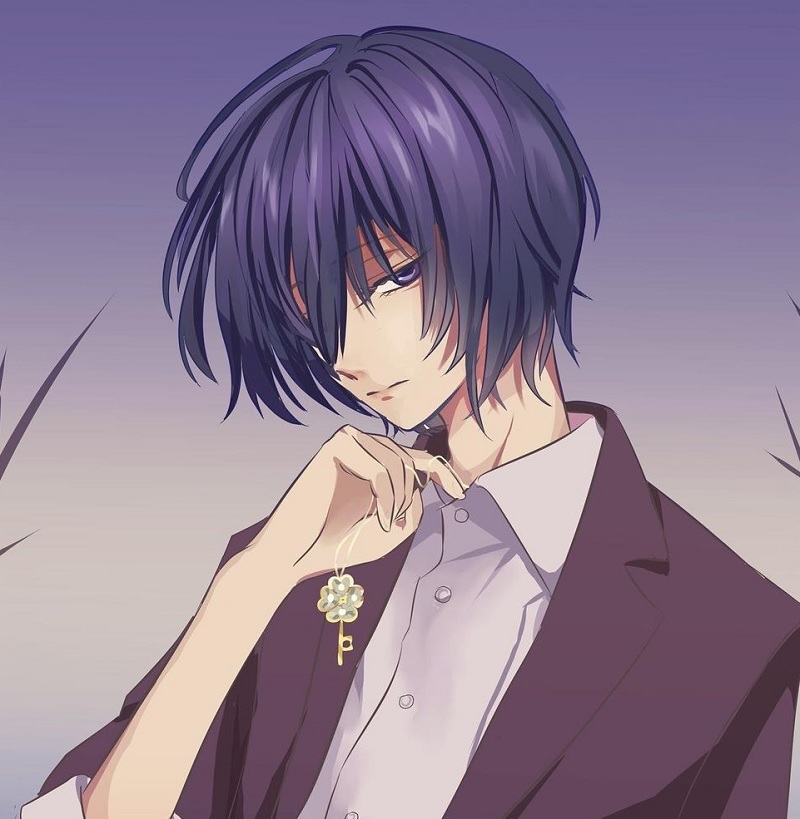 Who flaunts blue hair better than Ikuto Tsukiyomi? This mysterious anime boy from the Shugo Charal series has neck-length layers with a face-framing fringe at the front. The hair is dyed in a dark indigo blue hue matching the eyes. 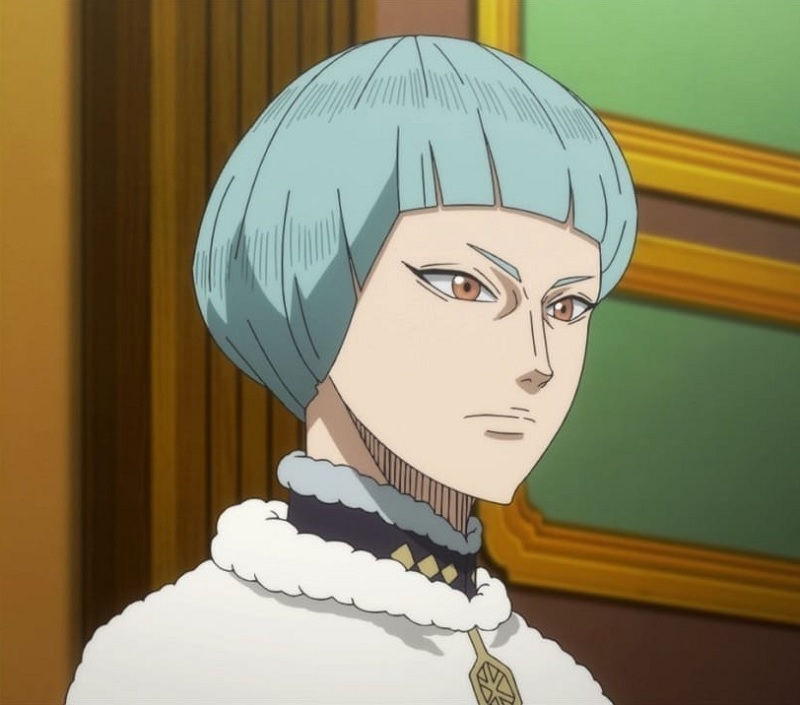 Marx Francois wears his hair distinctively different from others. The strands are dyed in a faded powder blue shade matching the eyebrows and styled into a conventional bowl cut. The front bluntly cut bangs cover half of the forehead and get longer reaching the nape of the neck. 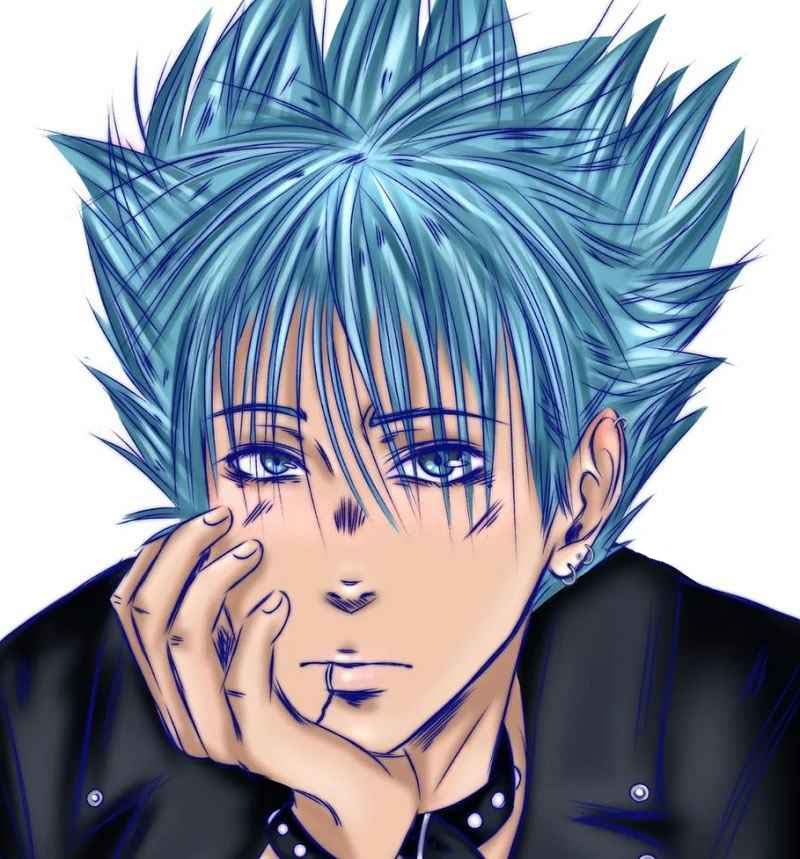 The cunning and wise personality of Shinichi Okazaki from the Nana series is visible in his blue hair. The hair is dyed in a light blue shade with dark blue streaks peeking through. Shini’s forehead and eyes are covered with sleek wispy strands contrasting the spiked up back. 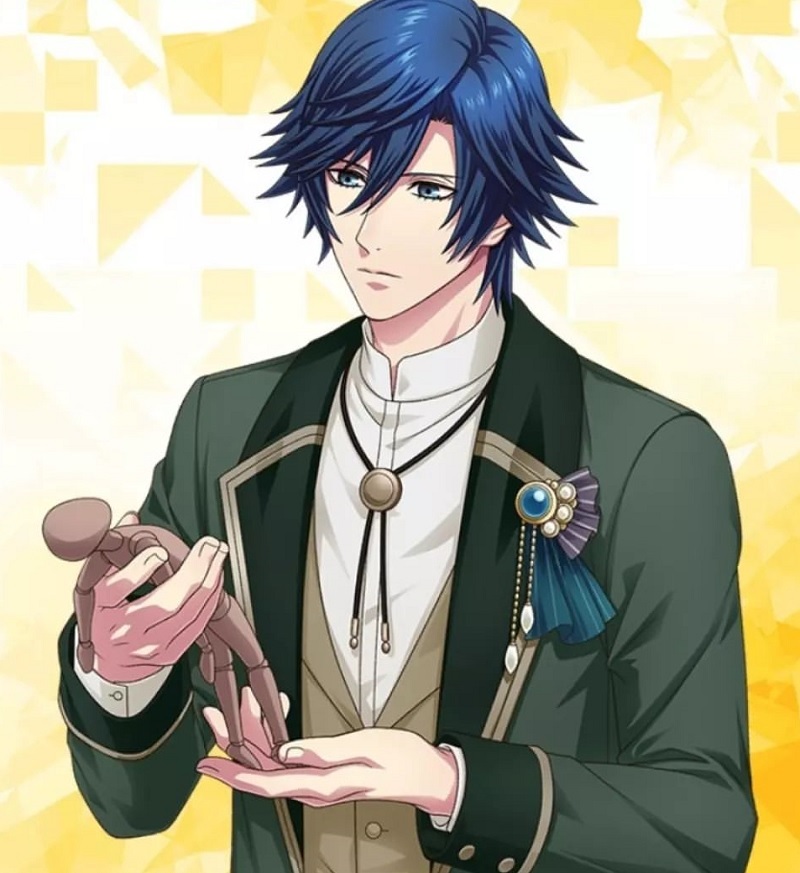 Tokiya Ichinose cannot be missed from the list of the coolest anime boys with blue hair. This character has a midnight blue shag that appears to be black sometimes. The hair is side-parted covering the ears and neck and a part of the forehead and cheeks too. 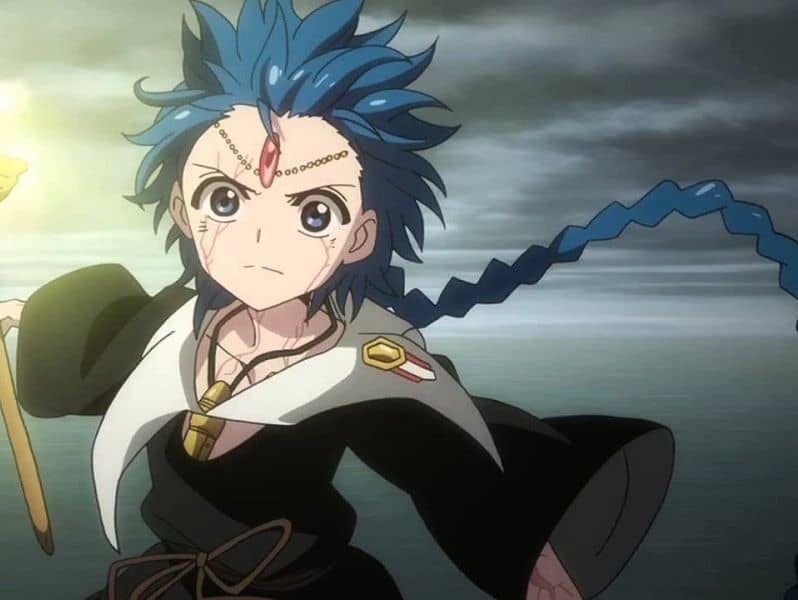 Aladdin is the blue-haired boy in the anime, Magi. He is one of the 8 generals in this anime and stands out as one of the best anime guys.

His short small body along with the medium-length blue hair and bangs in the front gives off the image of a kind, considerate and experienced general. 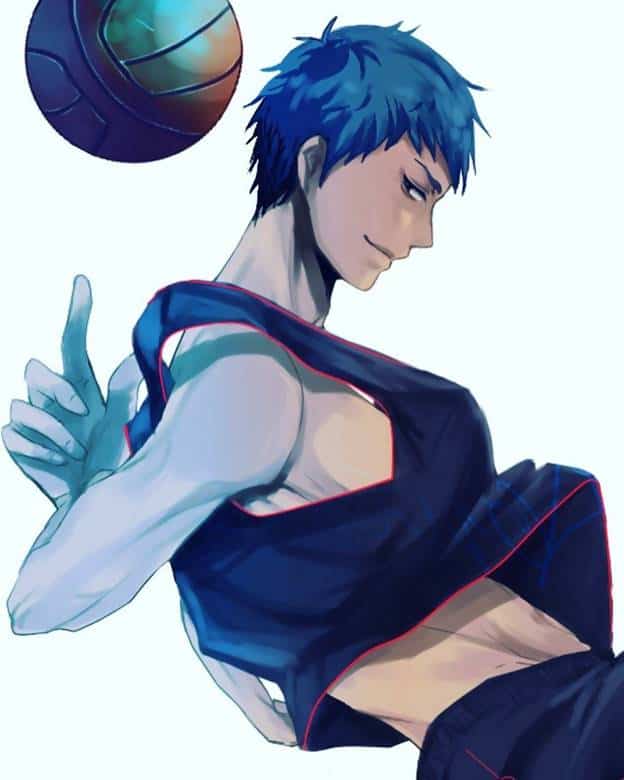 Part of the Kuroko No Basket, Aomine Daiki is an ace player of the renowned Generation of the Miracles. He is laid back and relaxed, and you may even confuse him to be a bit lazy.

He is an absolute basketball machine and can literally dribble past just about anybody and anything. 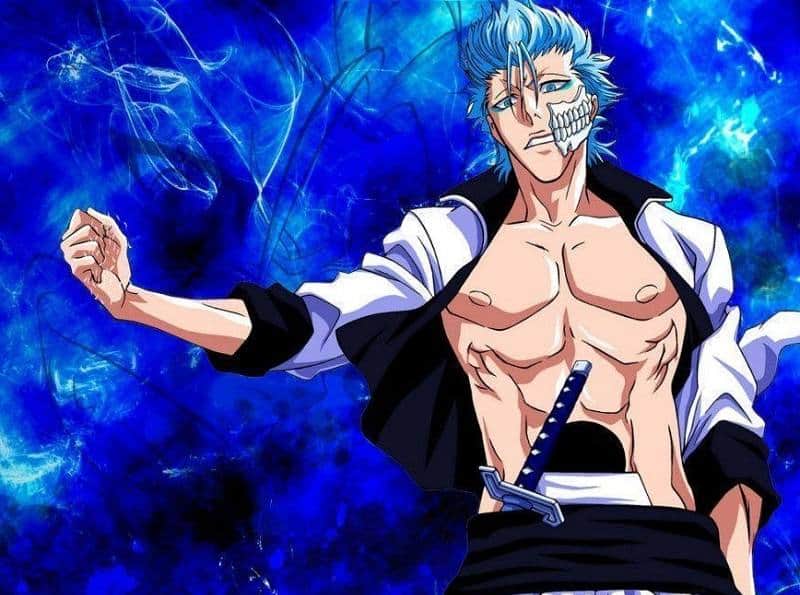 This anime character is, in fact, one of the best-known antagonists in Ichigo Kurosaki’s famous work. The light blue spiky hair gives you a fair inkling of his personality.

If you see it is a distinctly different color from what Aladdin is sporting. That is because he is arrogant, hot-headed and also has the power to back this attitude. 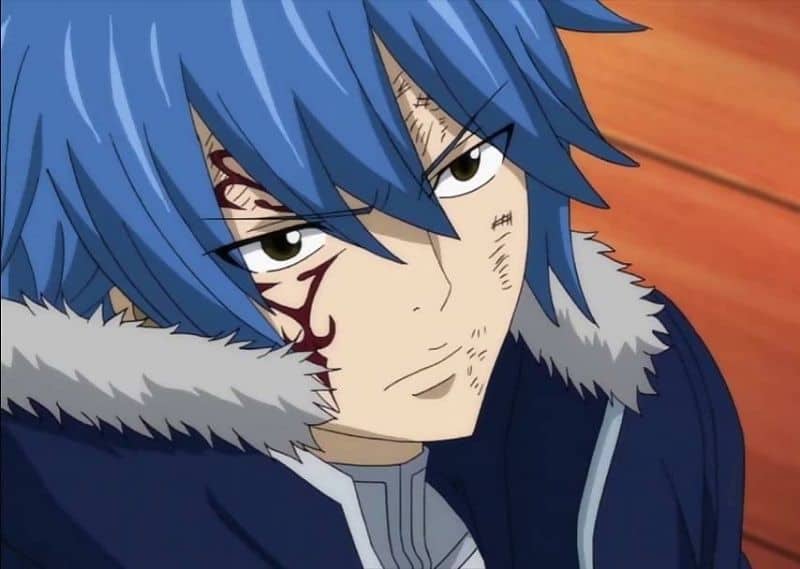 Though a picture of absolute peace and tranquility on the outside, this anime guy with blue hair is one of the deadliest monsters in the Fairy Tale universe and can wreak extreme havoc.

His hair is roughly medium length and falls across his face in a spiky short haircut. In fact, in terms of length and fall, this is a rather common style across the anime world. You do see similar blonde-colored characters too. 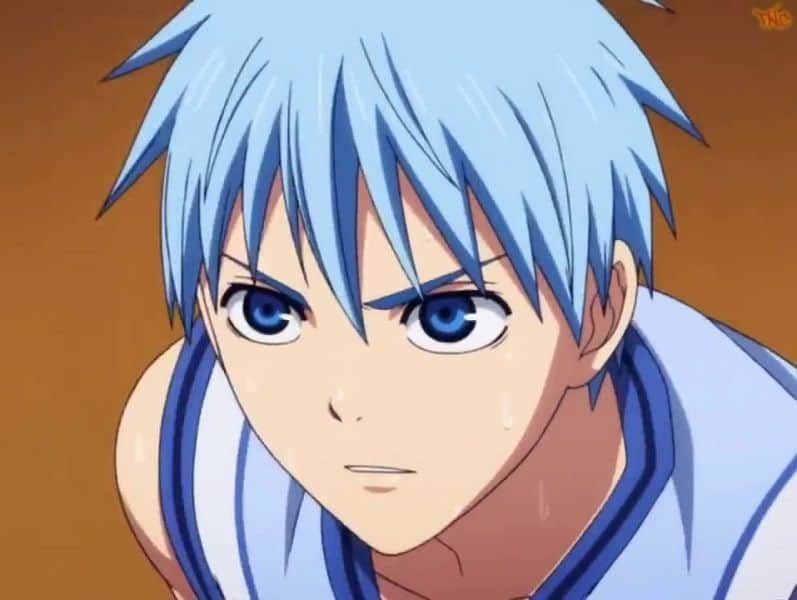 This is one anime boy who actually represents peace and tranquility. He is the sixth member of the generation of the Miracles and is extremely talented.

Watching Kuroku in action is quite a treat to the eyes and is an outright entertainer from the word go. When he is on screen, it is often difficult to take your eyes off him. In many ways, his short blue hair complements the overall impact that viewers have. 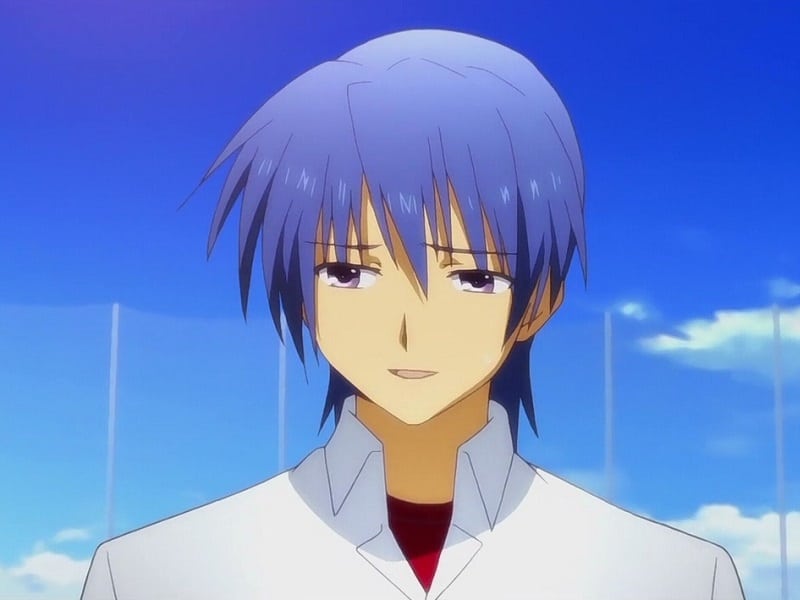 Composed and talented, here is another blue-haired anime character who will overwhelm you with his special power and scintillating screen presence.

Part of the Angel Beats series, Hinata is all about exuding supernatural charms and absolute role play. But don’t let the light blue trick you into thinking he is a peace-loving person. 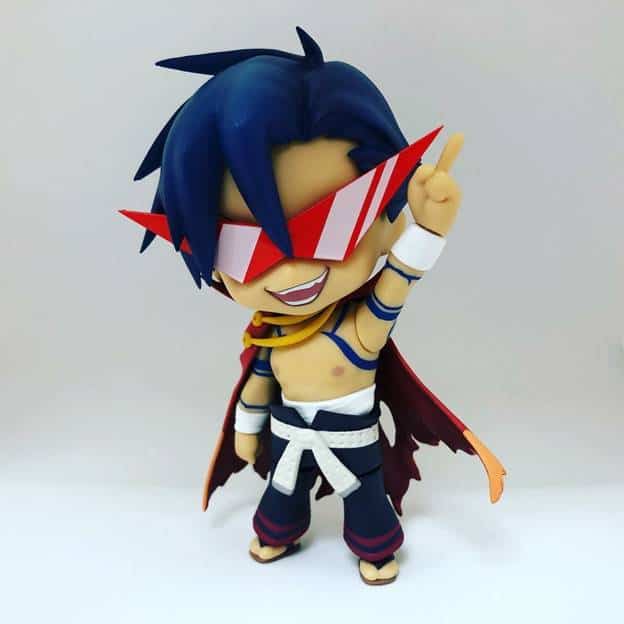 This guy is a young man from Jeeha Village. He is the founder and the leader of the Team Gurren.

His boyish charm and exceptional leadership abilities are highlighted by the short blue spiky hair. The deep blue color of the hair synchronizes with the charm and appeal of this anime character. 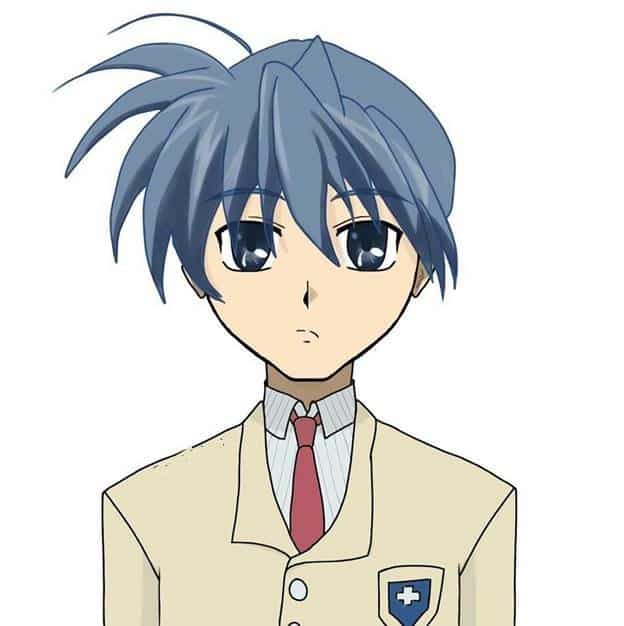 He is the key character of the anime series Clannad. He is perceived as a rather delinquent character who has the habit of skipping school and arriving late often.

These blue-haired anime boys may not always win your heart but stand out for their remarkable achievements. They are rather popular amongst youngsters and in case you are keen on working out your list of favorites, here is a handy list of options to choose from.

Each of these characters stands out for their extraordinary achievements and the commitment to the cause that they represent in the story.