Buzz cut hairstyles have been around for centuries. And buzz cut with beard is a modern take on this classic haircut. They are bold, military-inspired, and straightforward hairstyles for courageous men.

Buzz cuts are traditionally short and involve only regular trimming. They show off the facial features and masculinity. In recent times, men have added a little twist to buzz cut hairstyles. In place of a clean-shaven face, some men now sport a flattering beard.

Tips for Achieving the Best Buzz Cut with a Beard 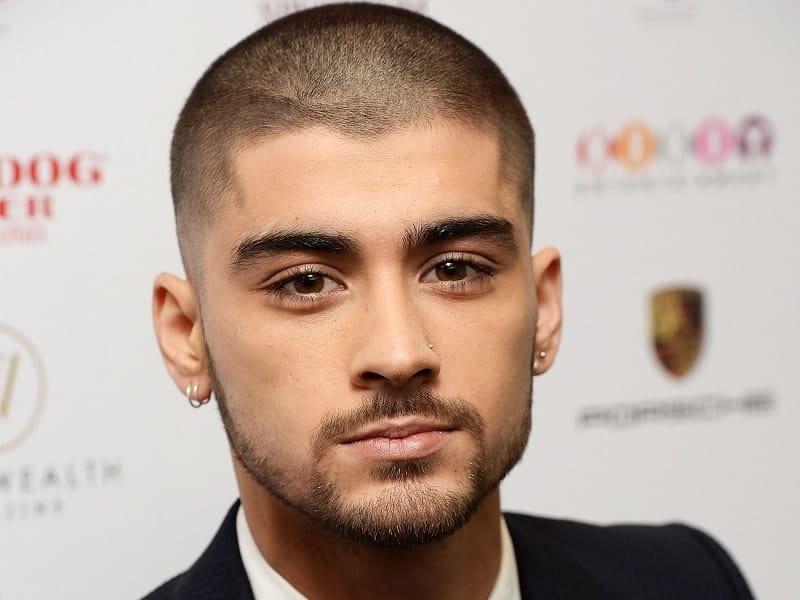 So, how do you pull off a good buzz cut with a beard? Read on to learn.

This may cut short your dream of wearing a buzz cut and beard, but it’s better to always use styles that suit you. The buzz cut doesn’t work for all face shapes. Before you tell the barber to take off all your hair, remember that oval and rectangle face shapes are both a good match for a buzz cut.

This haircut comes in different short lengths. It is important you know what buzz cut type and length will suit you best before cutting off any hair. Also, make sure that the barber is experienced with a buzzed cut or professional enough to give you what you need. Some barbers are erratic with a razor and this can be disastrous with buzz cut styles.

After choosing the hairstyle, decide on a beard. A buzz cut along with a beard should flow nicely. Pick a beard style that works with your face shape and fits the buzz cut style too.

These are a few examples of handsome buzz cuts with beards to get you started. 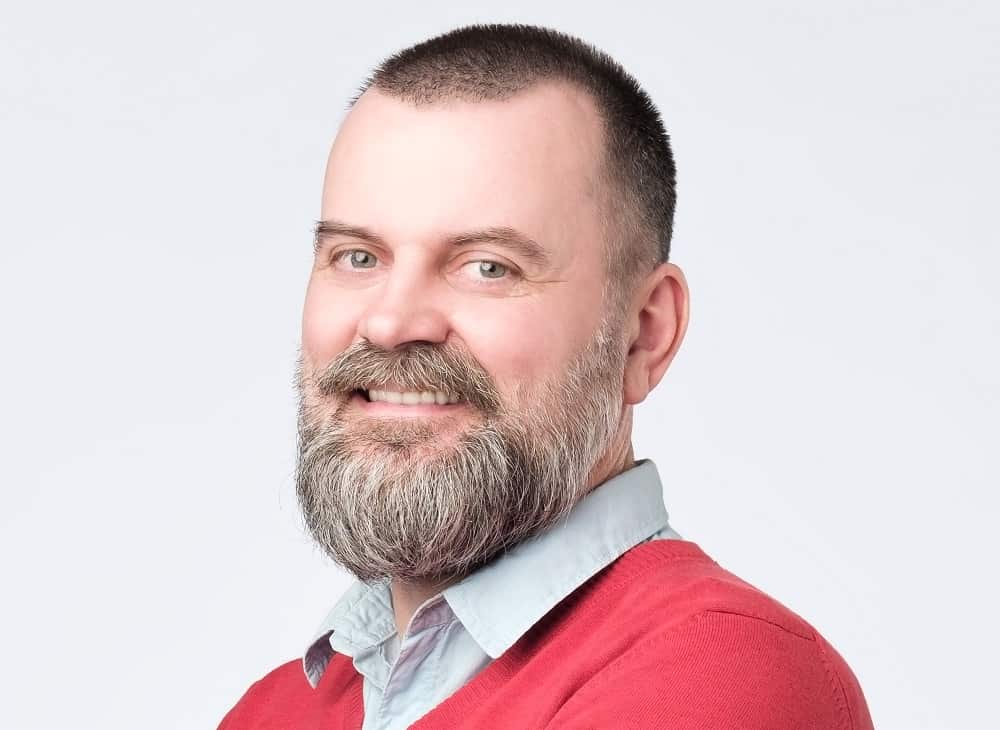 This super short buzz cut is as low-maintenance as it gets without going completely bald. Its solid dark color contrasts nicely with a neat white beard. 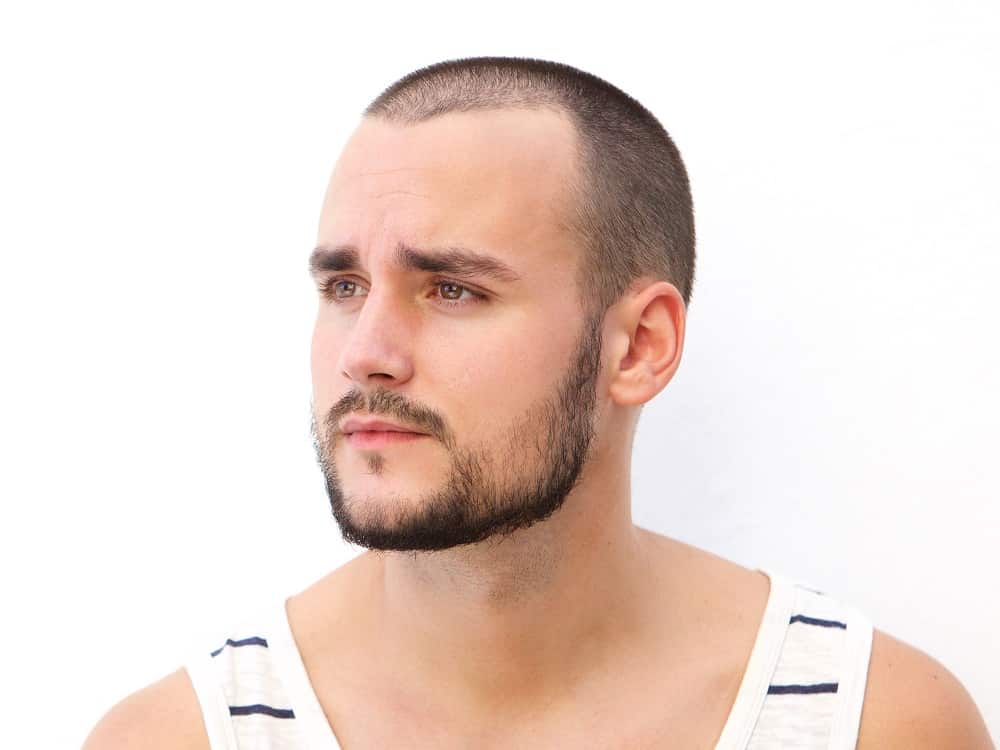 Younger men with widow’s peak often prefer minimal upkeep when they’re first starting out with facial hair. If that’s you, keep your beard thin and minimalist with a short trimmed haircut. 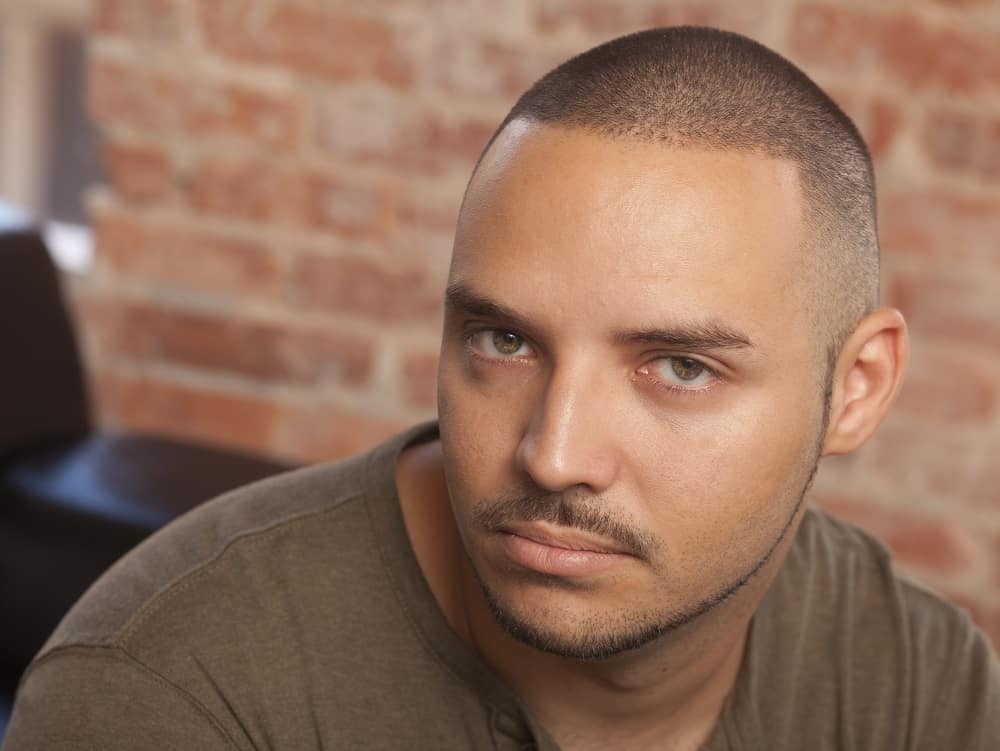 If you have a square face shape or one with angles, a chin strap beard will flatter your jawline. Opt for a thin version and a disconnected mustache to nicely complement a precise haircut. 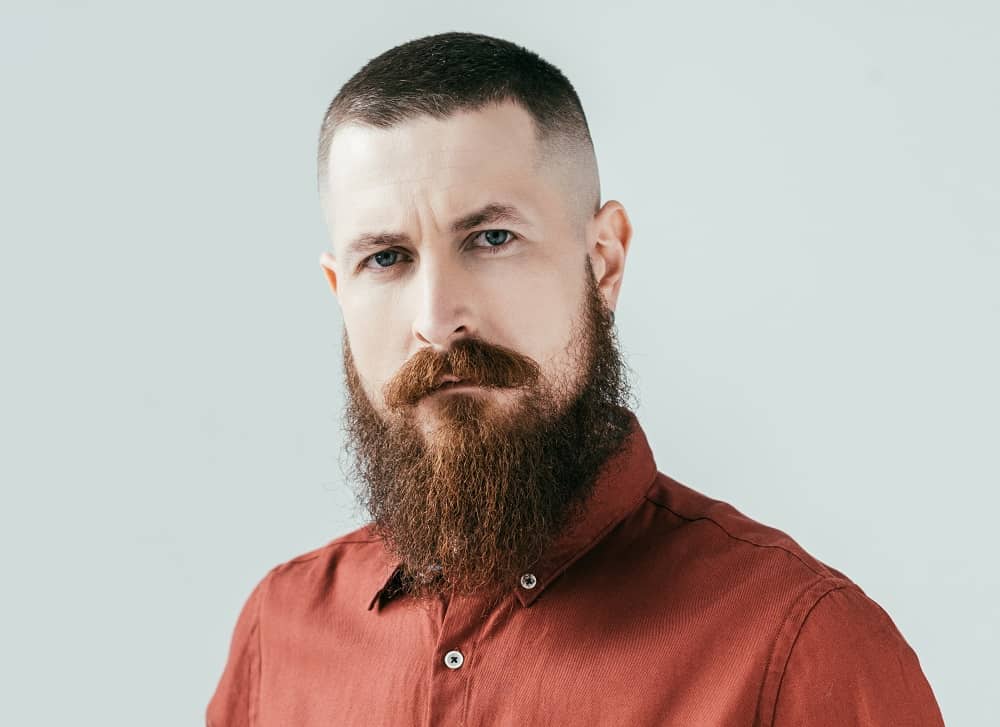 This faded buzz cut is a popular choice for men of all ages because of its ability to flatter a multitude of face shapes. Its shortness is a great contrast to a longer full and bushy beard. 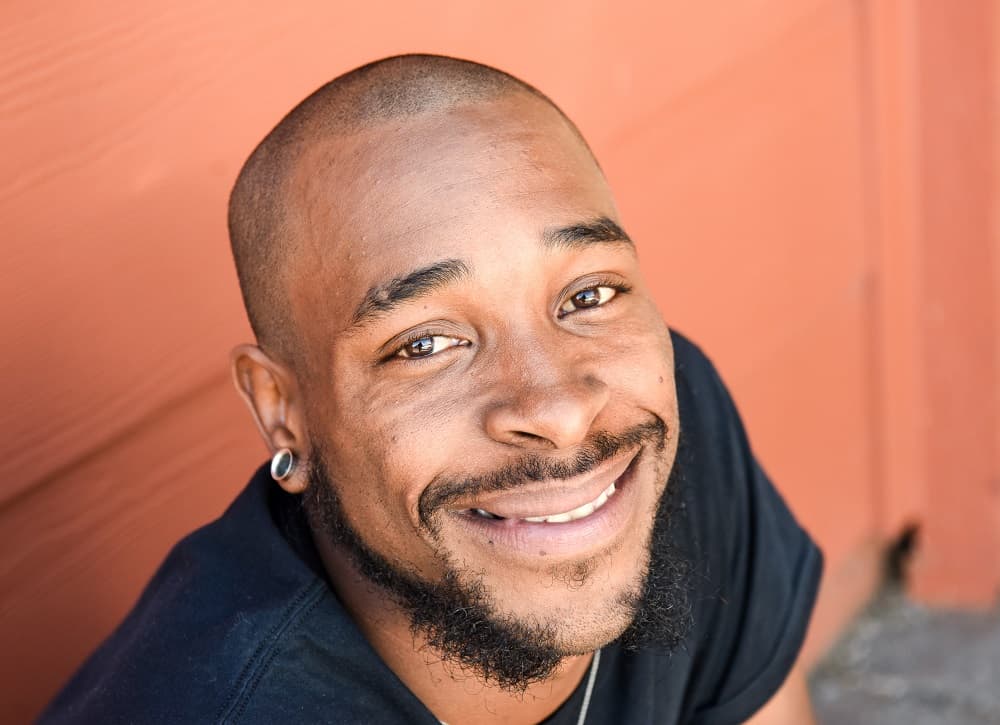 For another handsome barely-there haircut option, consider a bald buzz which is only slightly noticeable. The half thin, half thick beard has no hair right at the chin’s point and connects to a short, thin mustache. 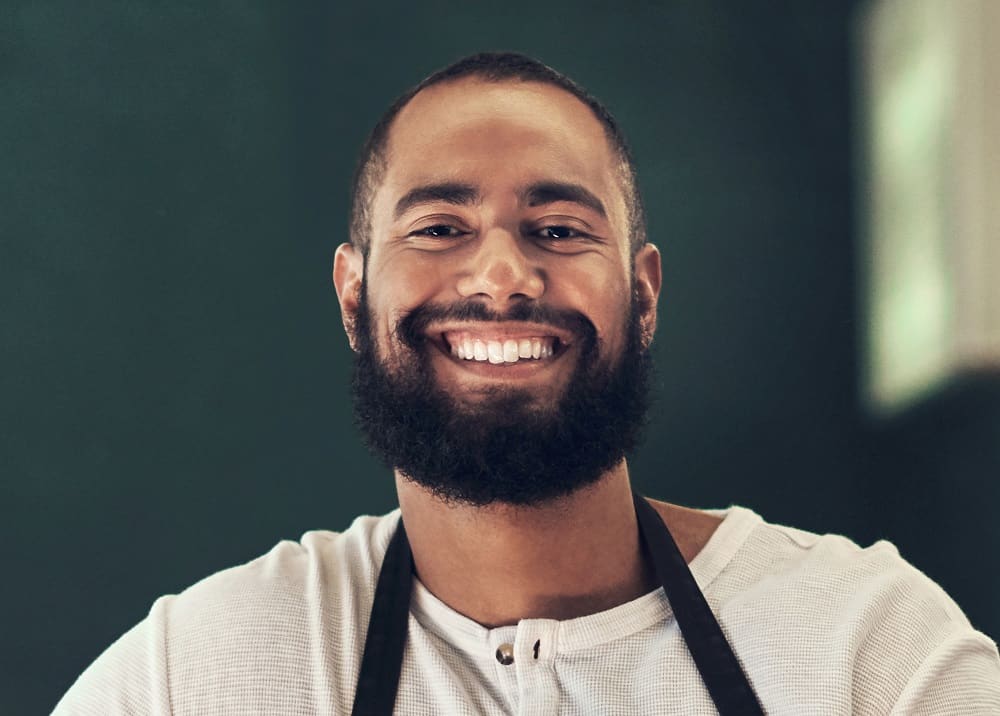 Do you like playing with different lengths and textures? A short buzz on an oval face will look great with a full beard and a short, thin mustache. 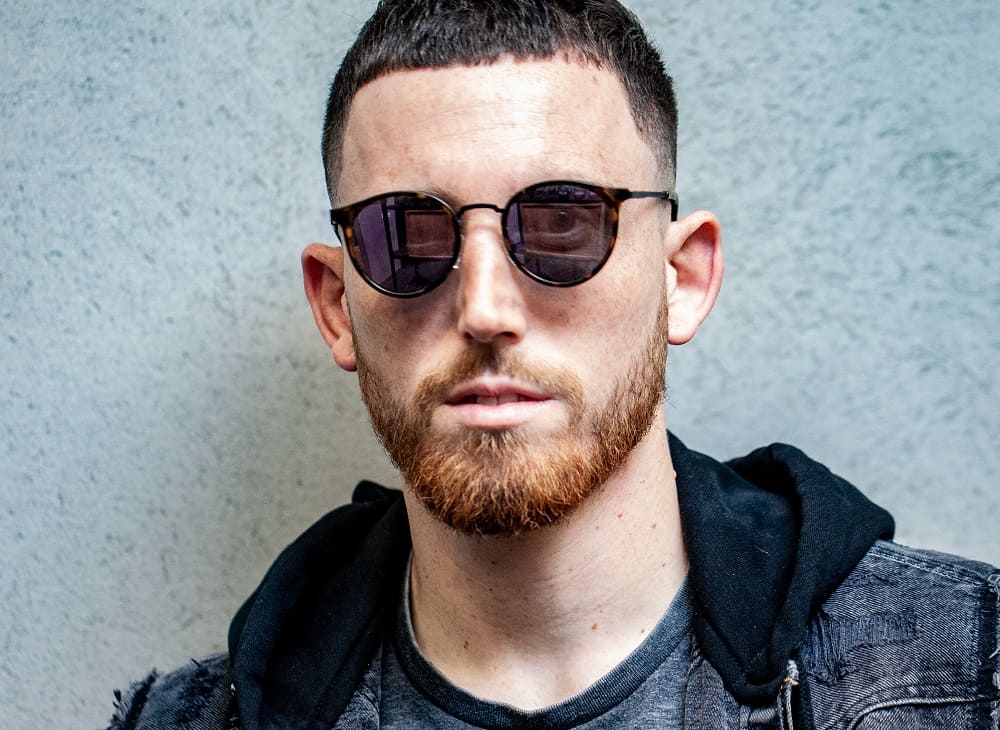 The hairline on the medium-length men’s buzz cut seen above is cut to a defined line. A temp fade and a short, neat beard blend nicely together. 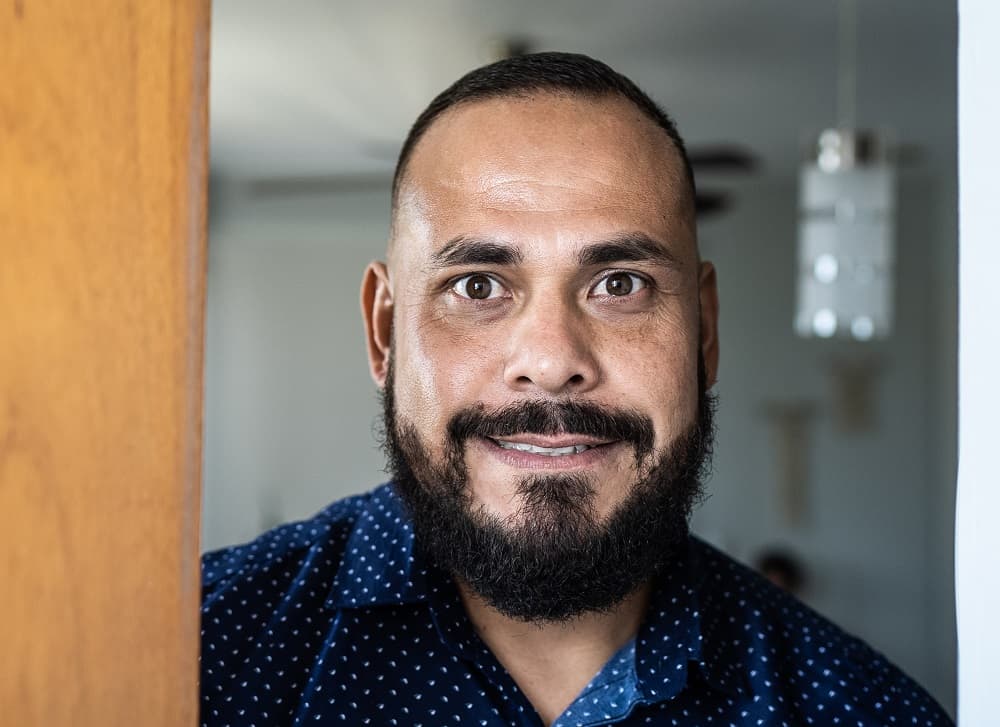 To define the shape of an anchor beard, cut it short and leave the rest of your beard thick and full. You can even dye the whole thing a dark color to make it pop with a neat buzz cut. 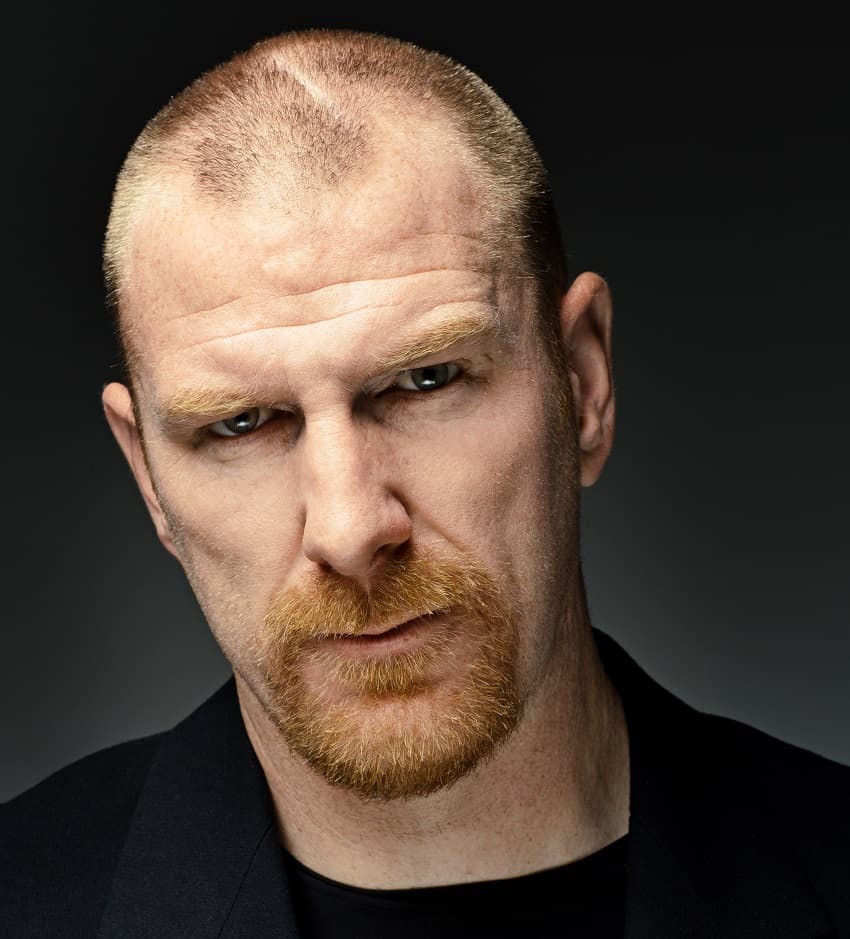 To balance out a buzz with a beard, keep them the same length and thickness. For example, a square or circle beard trimmed short matches the short buzz seen above. 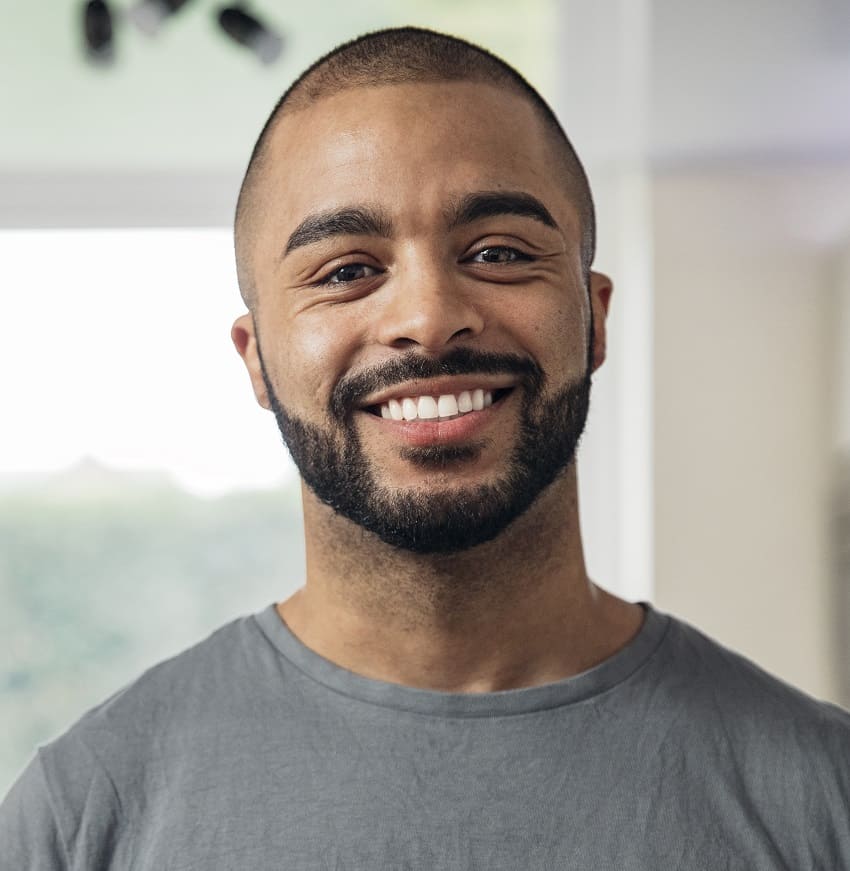 A boxed beard is a great option because it can either cover up a really curvy face shape or handsomely work with your jaw’s angles. To best notice the beard shape, go with a length of at least half an inch. 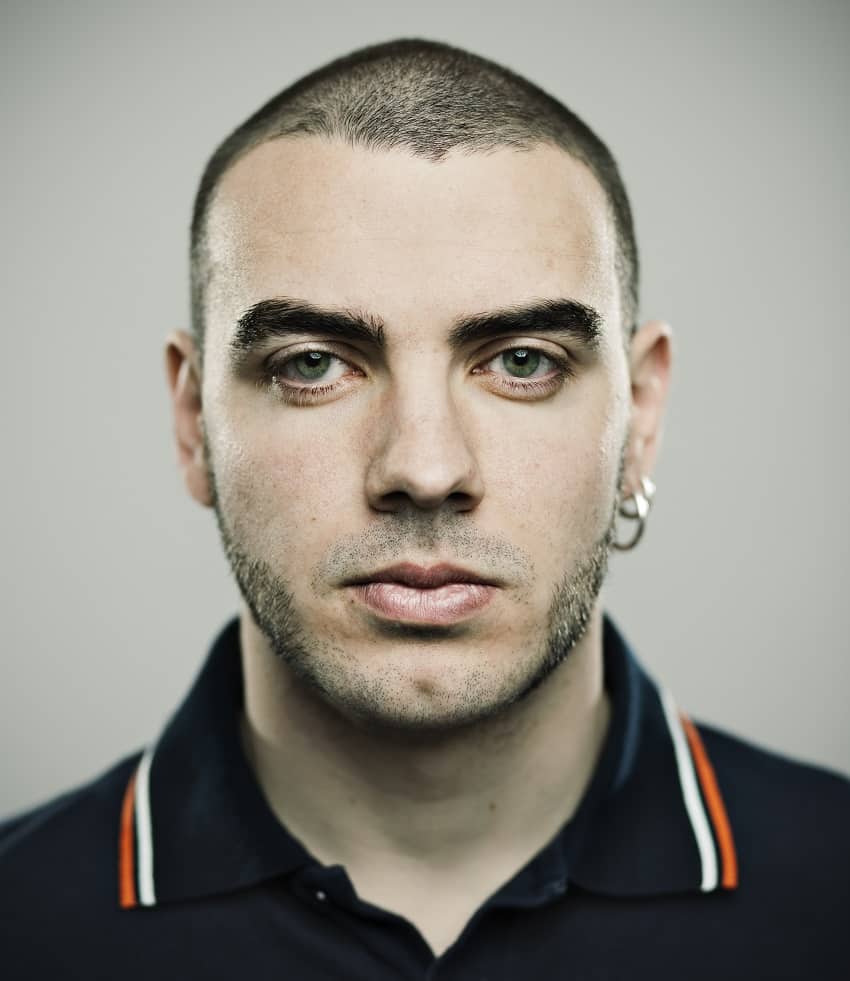 We often see this short beard and no mustache combination on younger men. It’s an easy look to maintain at home and looks great on men with round or oval face shapes and a buzz cut. 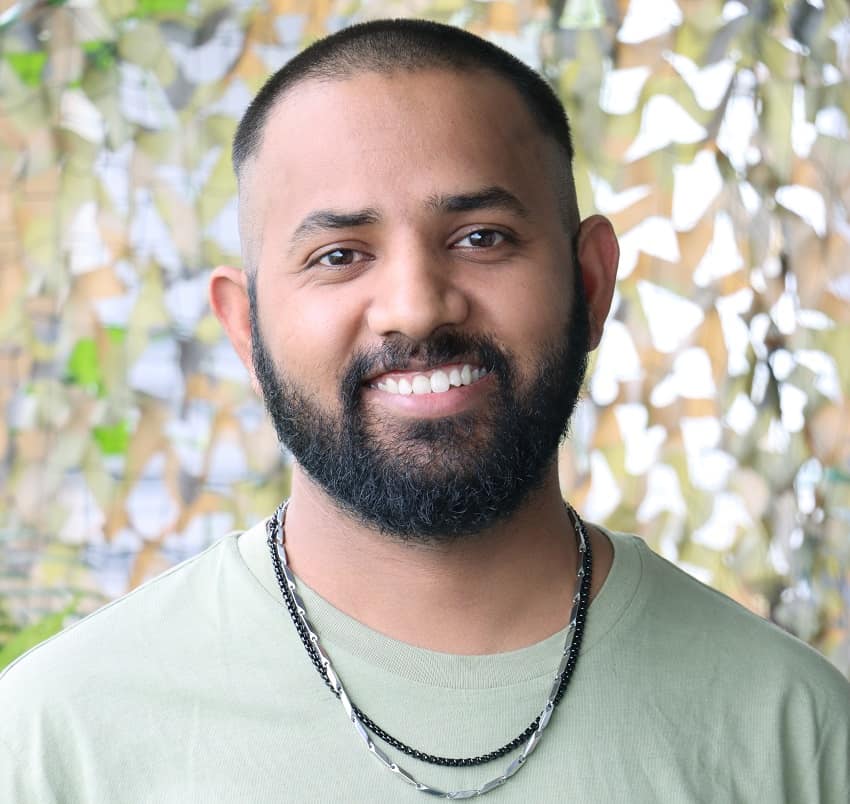 If you have a heart or square shape face, flatter those sharp angles with a high faded buzz cut and a full beard. To keep a neat beard, use a little oil and comb it straight down. 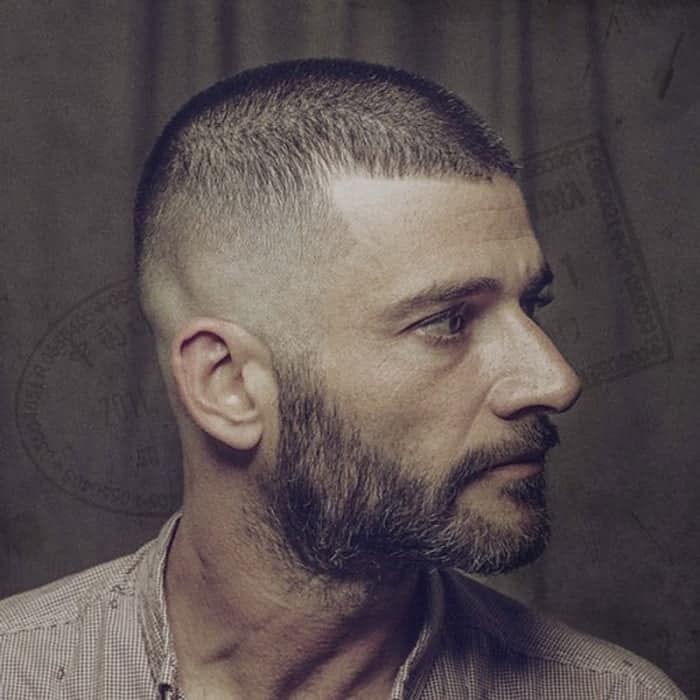 This look is a crew cut with a complementing low cut tapered beard. The buzz cut is achieved with a longer top and shorter sides and back. This buzz cut with beard combination looks so manly. 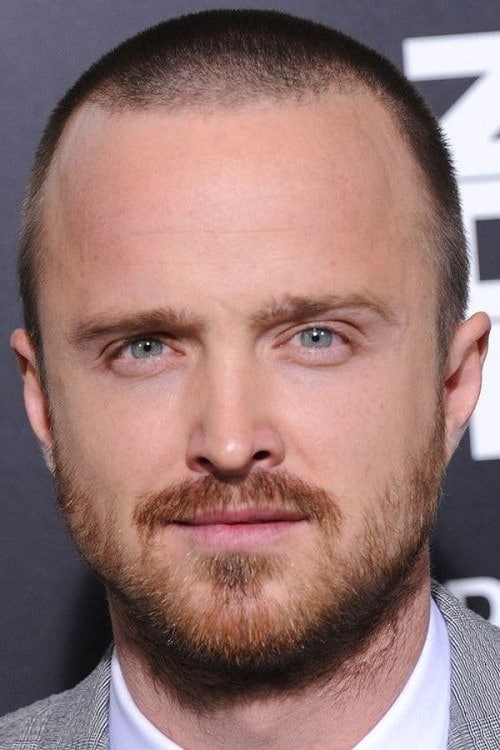 The burr cut is a popular military buzz cut hairstyle. For this buzz cut and beard example, your barber should use a grade 1 or 2 clipper guard. Trim the ginger beard accordingly too. 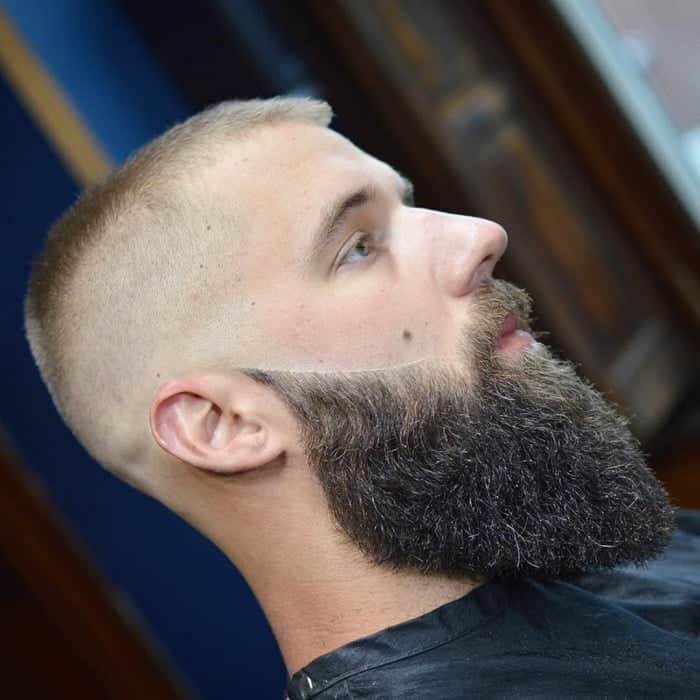 This look has buzzed sides and a longer upward styled top. Variations of this bald fade hairstyle with beard have a much longer top, but this is fine to suit the lumberjack beard. This is a buzz cut with beard look that should work for anyone because the lower face has a bushy beard to cover it.