Identity is a major part of a boy when he is growing up. Similarly, hairstyles from their favorite characters influence their style of appearance. This is a compilation of 21 of the best anime boys with blonde hair you can get your hairstyle inspiration from.

Here we put together top anime boy characters who sported blonde hair  and made their hairstyles so appealing. 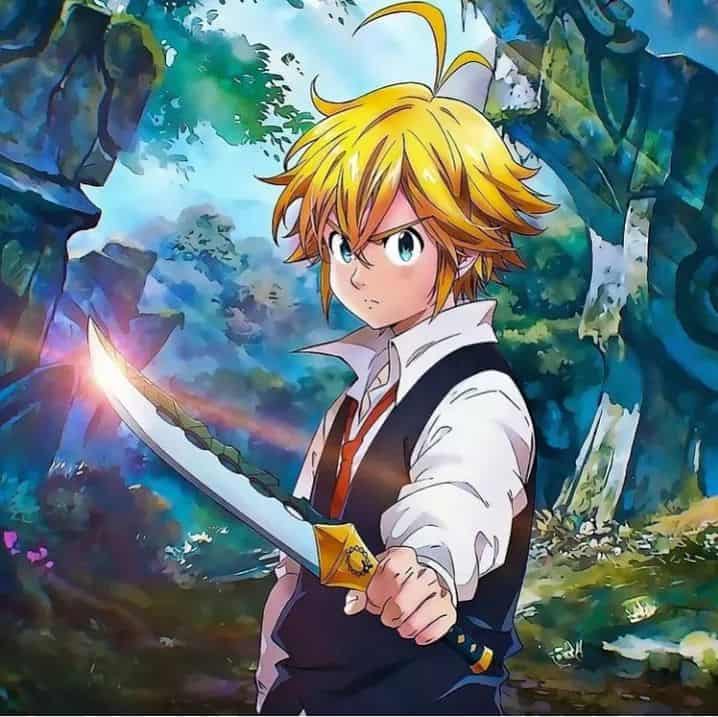 Meliodas has short blonde hair. To give your blonde hair some texture, ask your stylist to cut in short layers. They can be either even or choppy. Either way, you’ll love how easily styled they are just with a little hair gel on fingers. 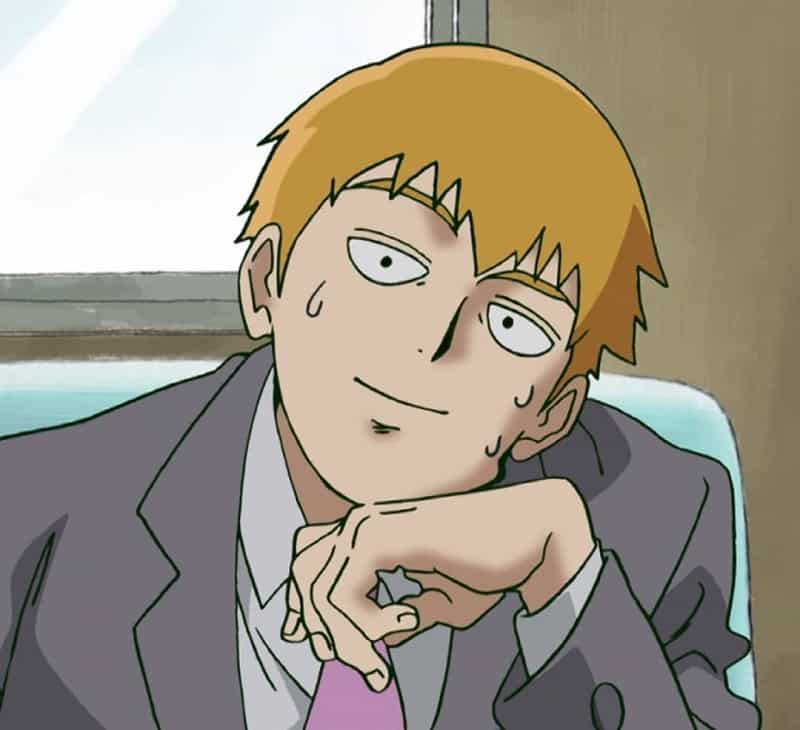 Another short haircut to copy is anime character Arataka Reigen’s. His blonde hair is piecey around the front with jagged cuts. This type of fringe is typically much more flattering than a bluntly cut bang, no matter what face shape you have. 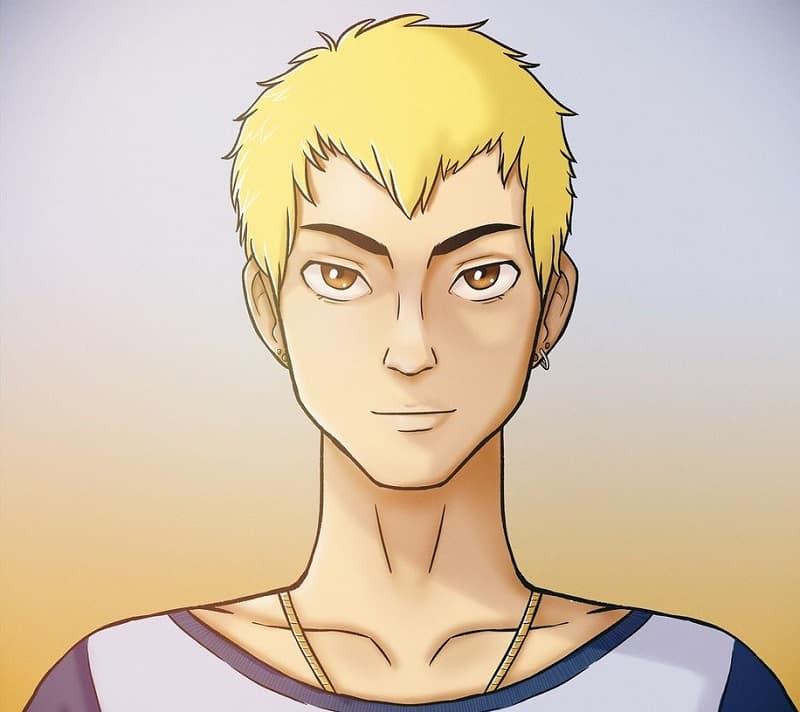 Whether you’re dealing with a receding hairline or you’re just looking for a punk men’s hairstyle, a cut like Eikichi’s could be the answer. The short blonde hair gets help with shape from a pointed front. Using a little hair gel will make that section of hair more defined. 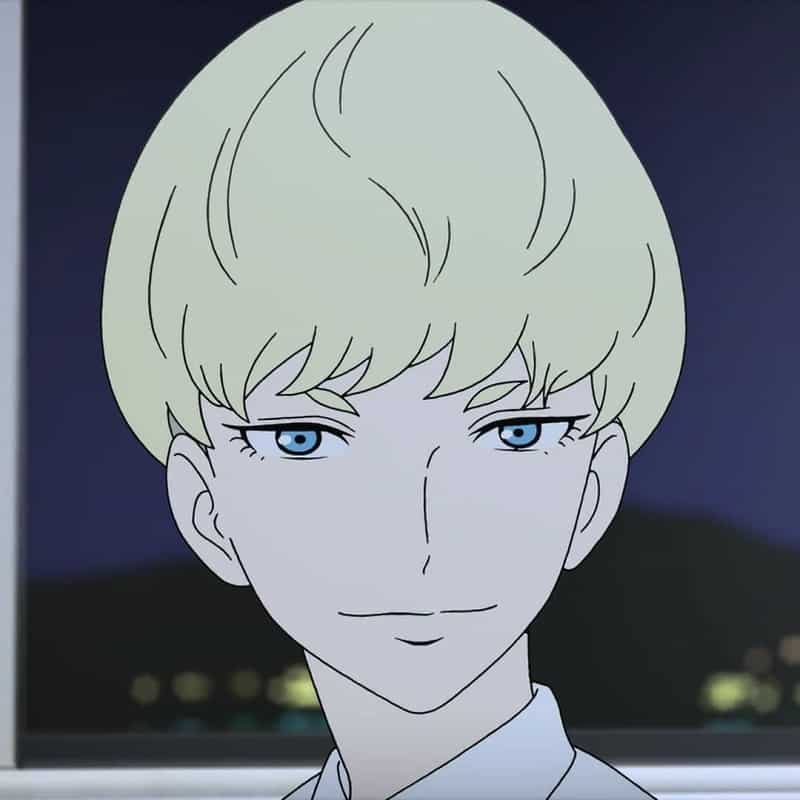 Not into too much styling when it comes to your hair but still want a new look? Whether you have thin or thick blonde hair, keeping it all above the ears is a manageable length. Leave the bangs to fully cover your forehead or create a piecey appearance with product. 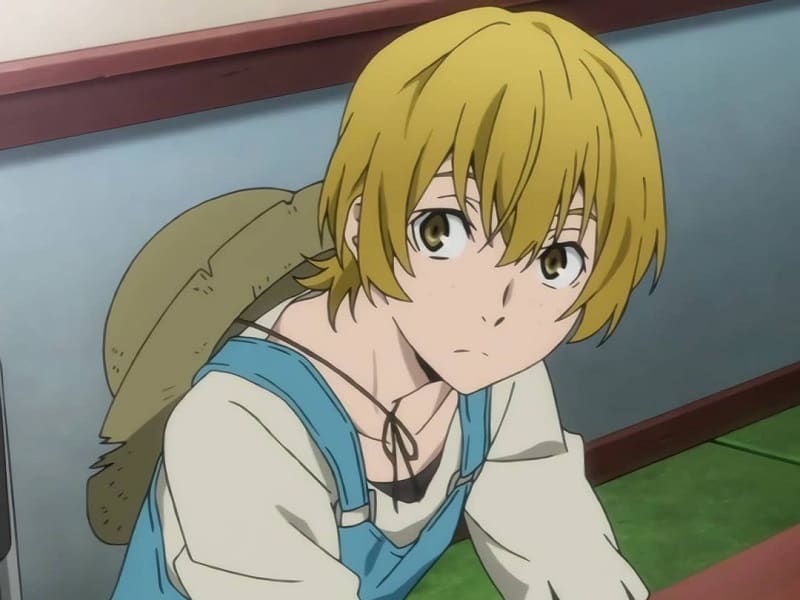 Men with long blonde hair are a weakness of many women! Take advantage of that by making sure your blonde locks are always looking good. This neck-length haircut rocked by anime character Kenji Miyazawa is shaggy with mostly straight hair. 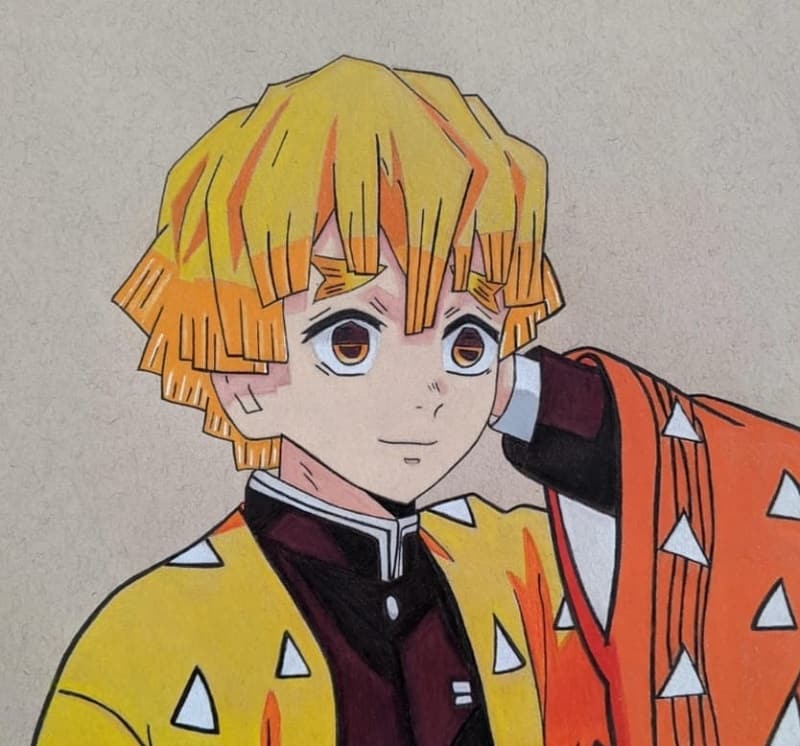 A chunky men’s hairstyle appearance is often handy when your hair is thick or you have trouble styling it. Take a hint from Zenitsu and use some mousse to work through your blonde hair. Having your hair cut with short uneven layers will make texture stand out more. 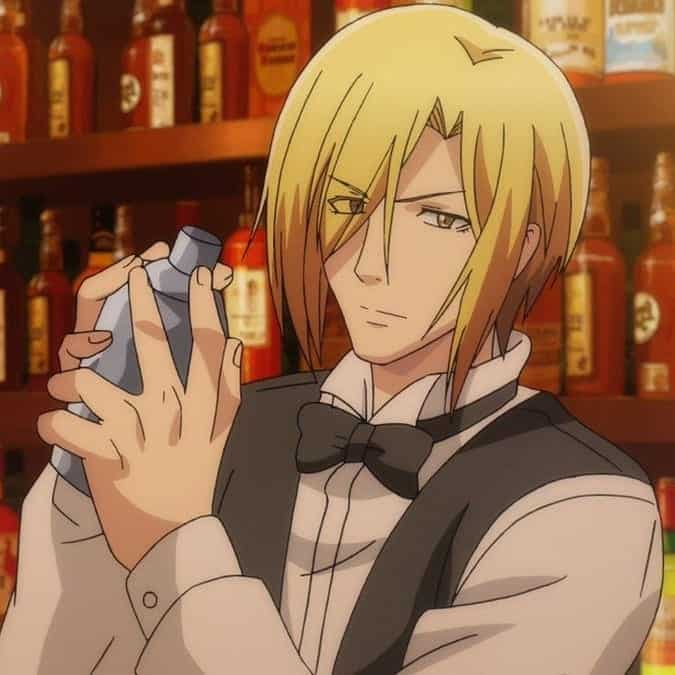 What guy doesn’t want to create a smoldering look with their blonde hair? If you have medium to long straight hair, get the handsome “hair in the face” look with lots of layering near the face. 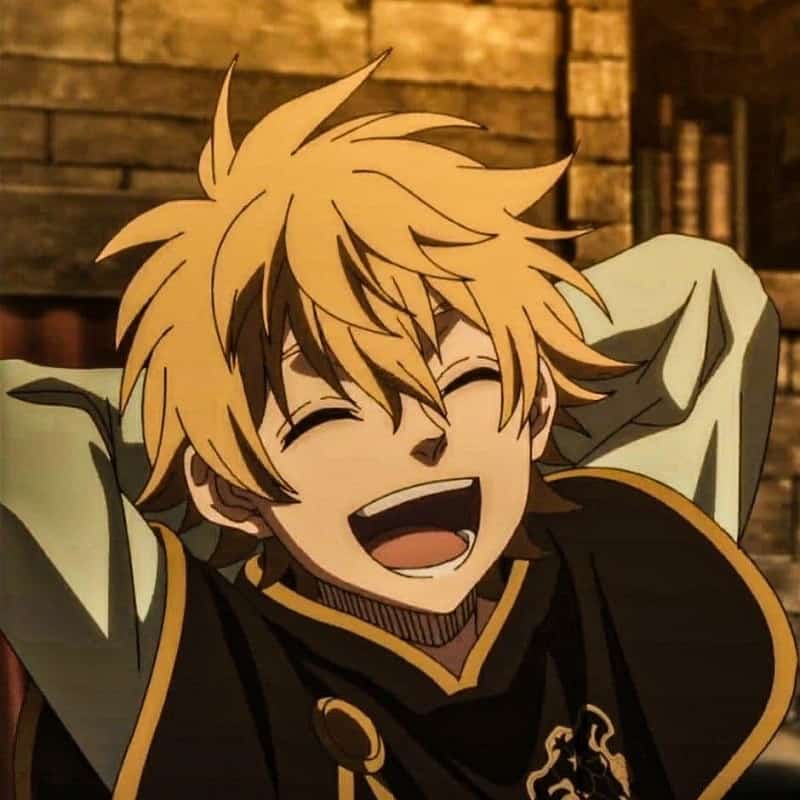 Anime character Luck Voltia puts his wild personality on display in his blonde hair! The bedhead look is an easy style to create in just minutes. Just make sure you don’t leave the house looking like a slob; some hair product will prevent that! 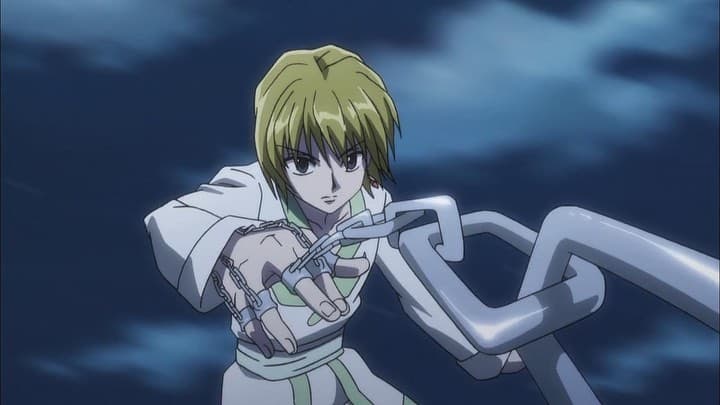 A short haircut like Kurapika’s is flattering to many face shapes. While the long-layered blonde hair does look its best when hair is mostly straight with minimal texture, almost any hair texture will respond well to layering. 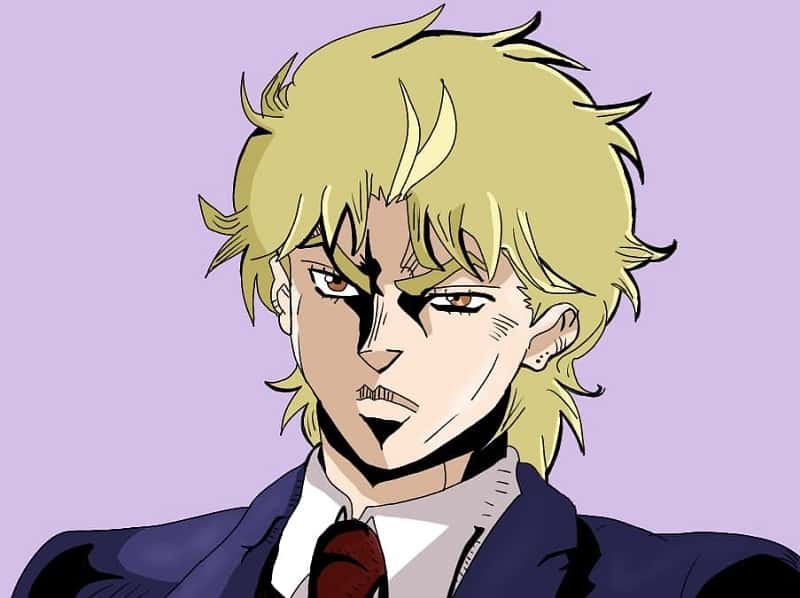 Count yourself lucky if you have thick blonde hair! At any age, a thick head of hair is blessing. To cut down on bulk and give it more shape, try leaving the top and front areas long, with shorter and thinner styling in back. 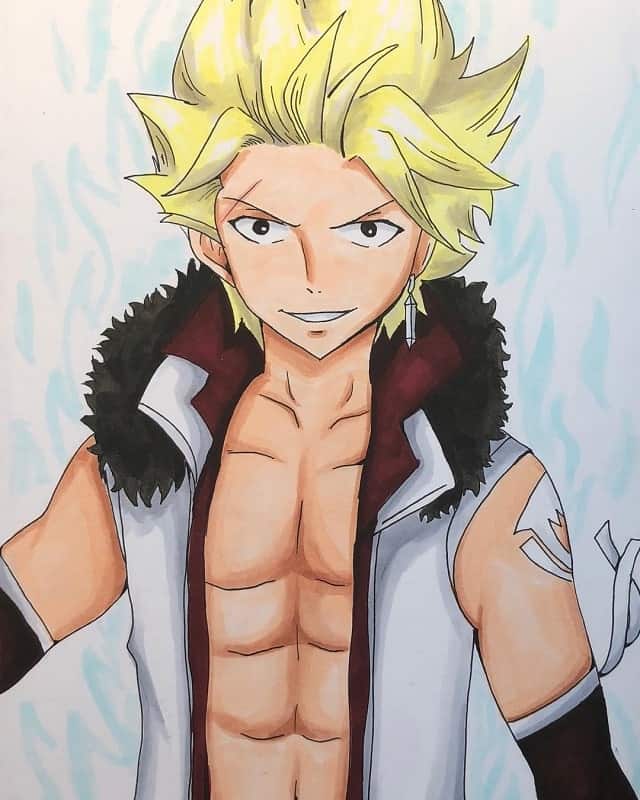 This tough dragon slayer is handsome and daring. This guy has thick wavy hairstyle with protruding spikes all over. Like a piece of art, his blonde hair is evenly distributed with some tuft spikes hanging over the sides of his face.

His body tone adds to the appeal of the young boys who dream of matching his machismo. It is a perfect idol character for those with a heart for toughness. 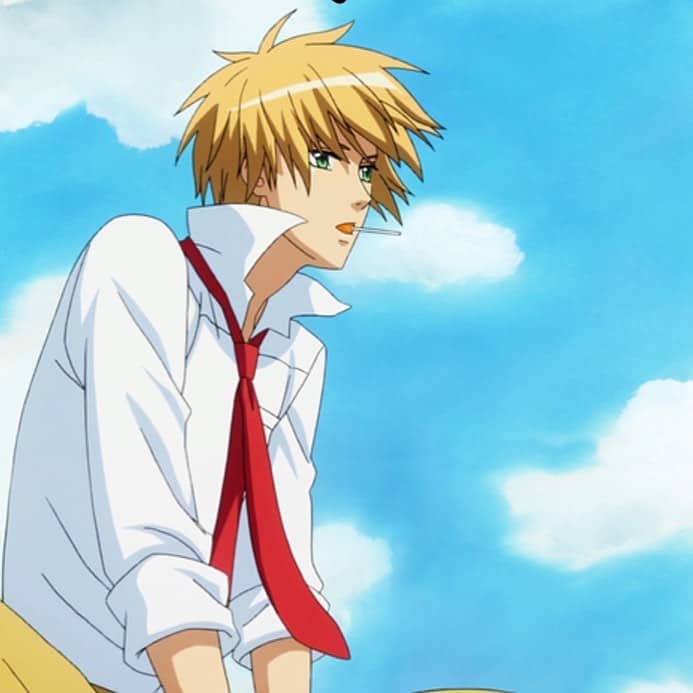 Better known as the Perverted Alien, he is the soft kind-hearted anime boy guy from Maid Sama. His blonde hairstyle is appealing and straightforward, enhancing his handsome looks. He has short soft down flowing tufts.

Also, the tufts are evenly distributed across the head with some covering the upper face. With a slender athletic body, he comes out as the perfect choice for those with an attraction to girls. 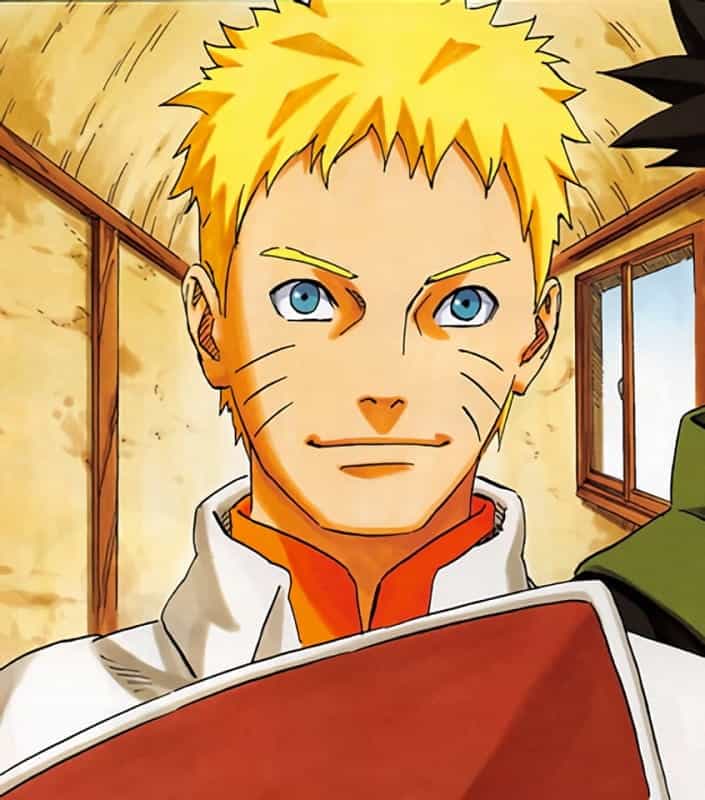 He is the most popular ninja, blonde anime boy. He likes his hair short with fury spikes. Maybe, his three stripes on each cheek make him feel like a cat.

Creating this guy’s short spiky hairstyle is simple. Apply some little wax and style. If you want, you may add some hardening and sheen spray. This is a good match for the wild in spirit. The boys who want to experience the machismo within. 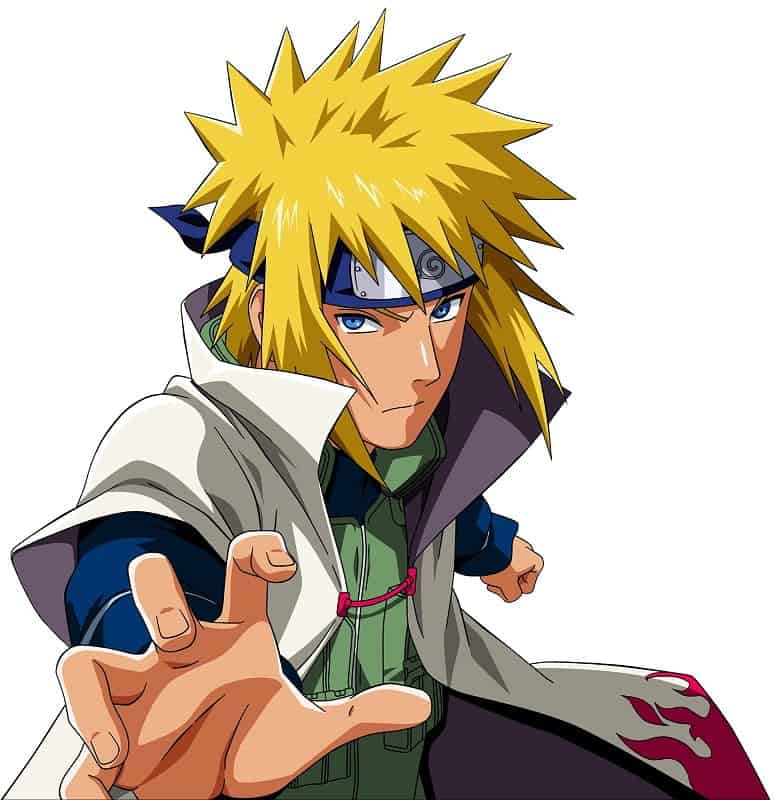 This hero from Naruto Anime series is the father of Naruto Uzumaki. Minato is a ninja of high repute. His hairdo matches his character. He adorns his hair medium and spiky, with some locks hanging on the sides. Mostly, he has his trademark hair accessory, the metal plate forehead protector.

This simple blonde anime hairstyle is easy to do as a craft. First, straighten your hair with a hot iron rod. With the headband in place, wax, and style your hair. You may add hairspray for some hardness. If you are in martial arts, here is your style. 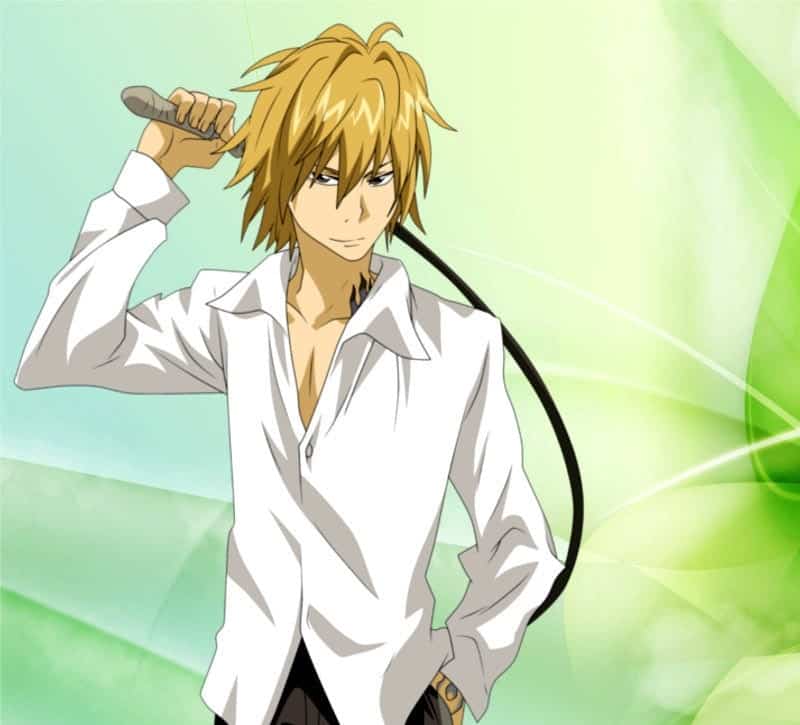 He is tall and handsome. But that should not fool you. He is also tougher than you think. This anime boy with medium-length hair from the Cavallone mafia family is a leader and fighter. His trademark bullwhip sells out his peaceful, innocent boy demeanor.

As for his blonde hairstyle, it is a simple bunch of tuft locks. They are free lowing with bangs covering part of his face. He is the favorite to the cunning characters. 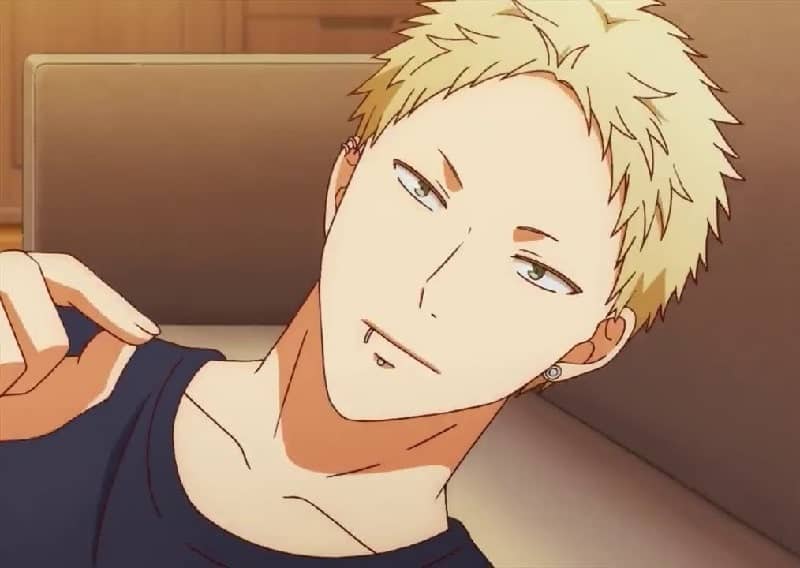 He is the bad boy of the anime boys with blonde hair. The face is full of piercings. His ears have studs and several top rings. While his hair is short, he still comes out as a carefree spirit.

He has thin eyebrows close to a pin line size. His lower lip and tongues also have some studs. His looks give him the character for the unruly and daring. 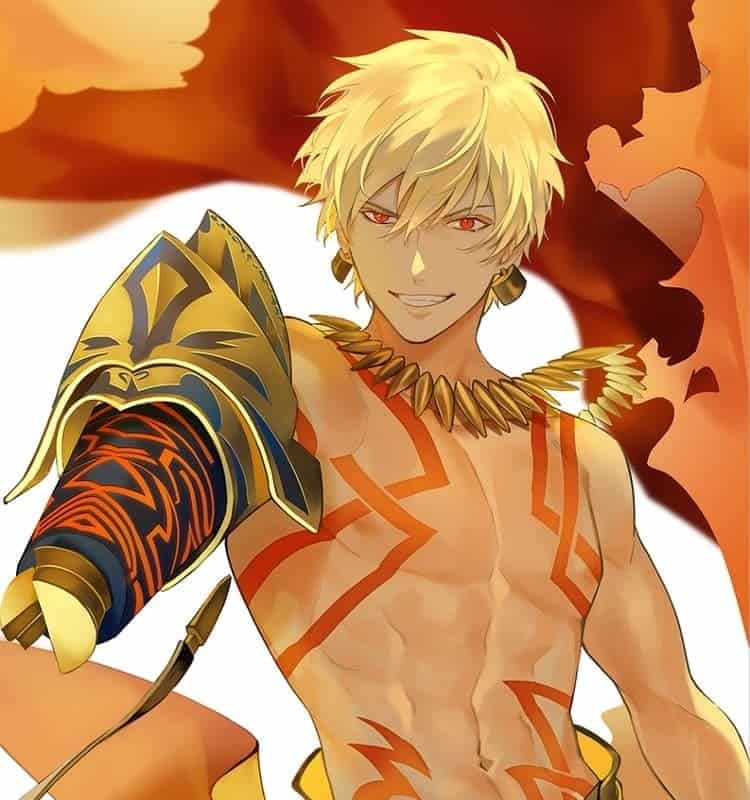 He is a character from the ancient Sumerian civilization. Better known as the Archer, he comes out as the unsung hero in the Fates series. He has medium down flowing hair with some bangs covering his face.

His evenly toned body is perfect for his athletic and military exploits. He stands out as both a tyrant and a hero of his society. This character radiates best with boys who dare to push their boundaries. 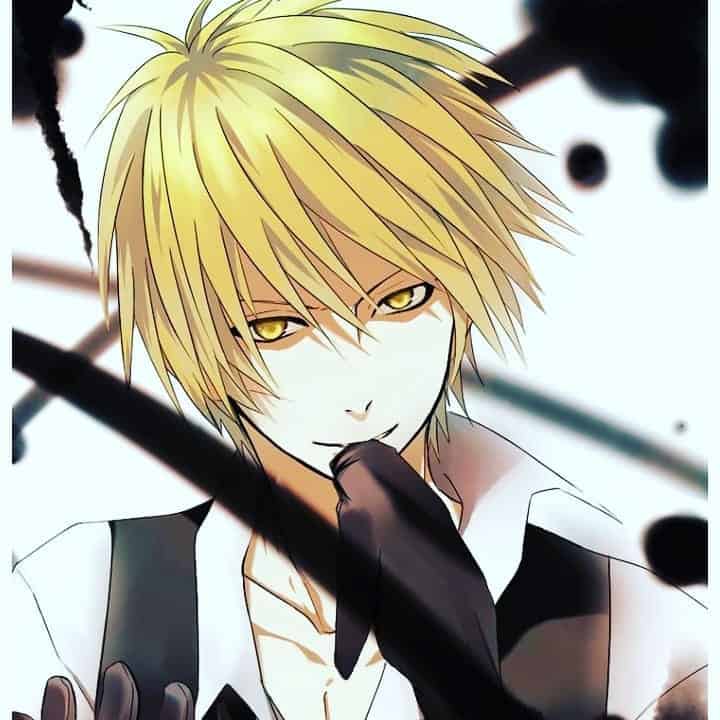 He comes out as the peace-loving passive personality at first sight. That is a big mistake. This anime boy with shaggy hair is a tough and no-nonsense person. He is violent when it becomes necessary.

Besides, he is a bodyguard. So that calls for occasional beating of people. His appearance is sleek. He has downward free-flowing blonde tuft locks and a trademark bartender suit. A real personality for those who want a discreet life. 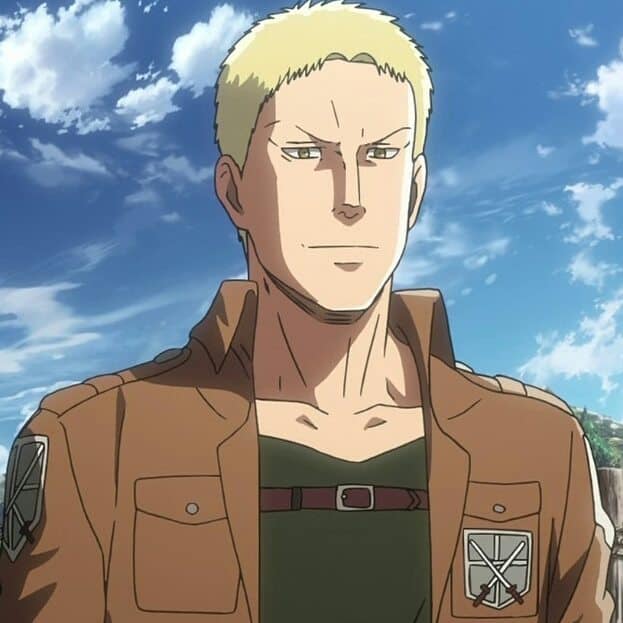 He is the tough blonde guy from the anime series Attack on Titan. His facial look presents a fierce and means character. True to his looks, he is sly and has a cold heart. He is intelligent and infiltrates the enemy lines with ease.

A former military person, he is full of combat skills. He is one of the few German named blonde anime boy personalities. His hairdo is simple like the military men. Young boys like his military exploits. 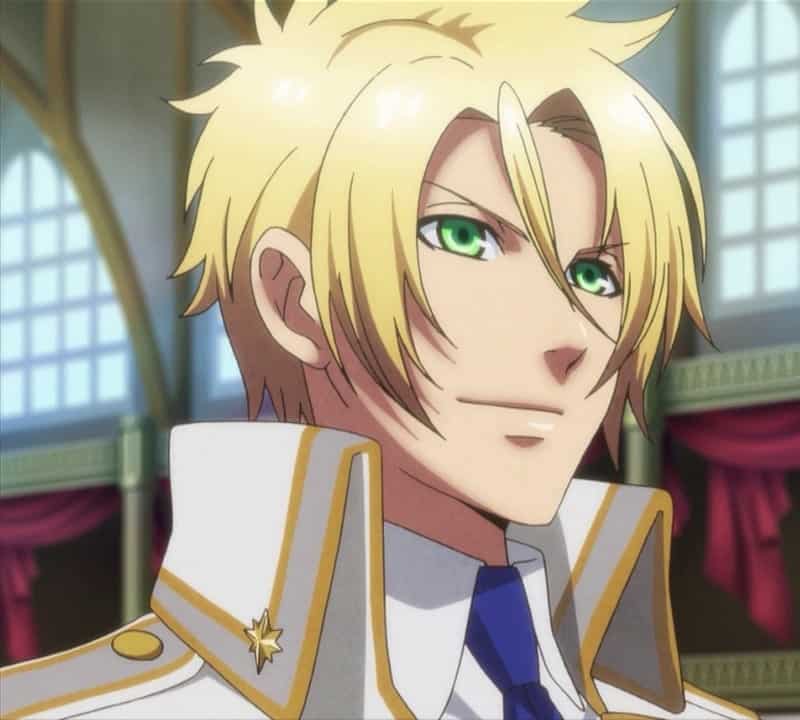 His elegance is exceptional. He has a medium natural blonde hairstyle. His blonde locks start from the root on the head and flow downward.

This anime boy hairstyle is simple. With flowing hair, all you do is comb it downwards. This is the style for the rich boy in town. 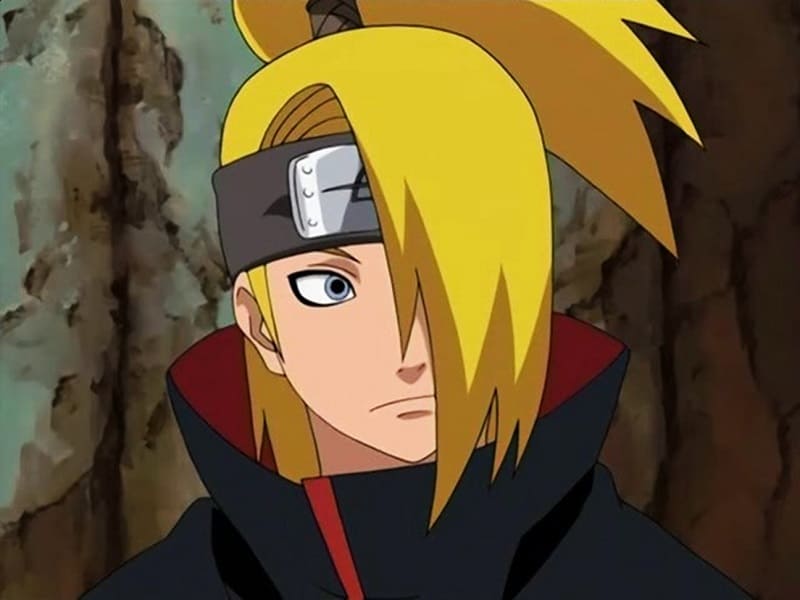 This serious-looking anime guy with long blonde hair is a good match for the older boys. His hairstyle is carefree and wild. Even in the most conservative ways, he is still the free spirit. For those with a roaming spirit, you have your hairdo.