Kaley Cuoco‘s short pixie hairstyles are popular among girls, especially among those who watch ‘The Big bang Theory‘. When Kaley Cuoco first stepped on the scene, everyone was in love with her long, golden locks, but she shocked fans everywhere when she entered Season 8 of ‘The Big Bang Theory’ sporting a very short pixie cut.

While many fans argued their dislike of her new style, others embraced Kaley’s edgy new look. During an interview with Ellen, Kaley stated that she’d always wanted to cut her hair and finally got the chance while she was filming ‘Burning Bodhi’.

Since that drastic change, Kaley has rocked many haircuts and hairstyles that have shown off her gorgeous features and won over our hearts. Here are 15 of our favorite Kaley Cuoco hairstyles, haircuts, and colors. 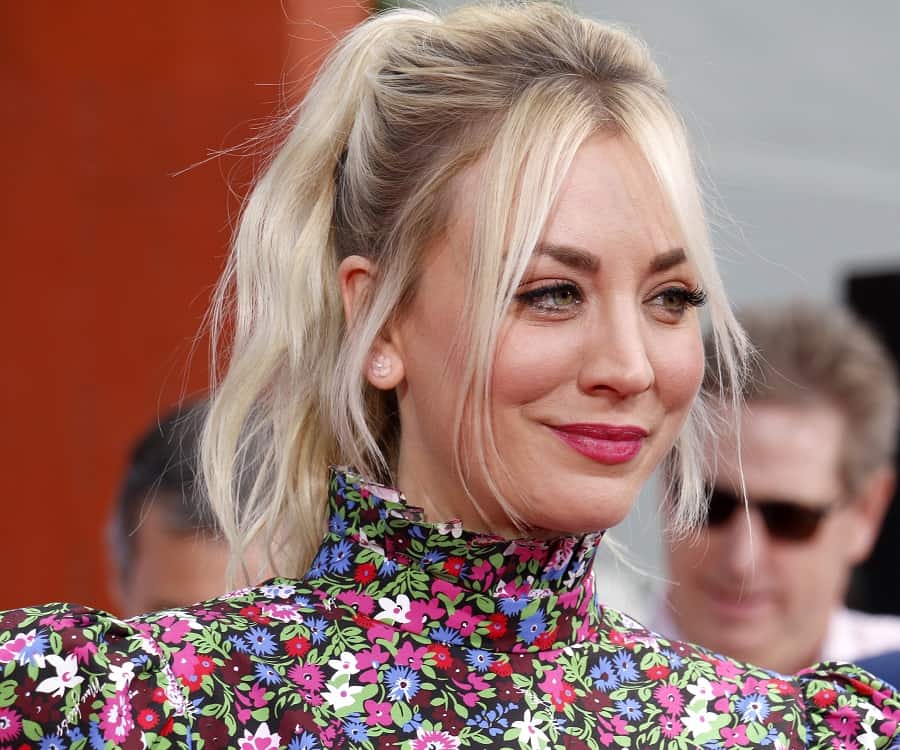 Over the years, we are sure most of you searched the internet for Kaley Cuoco hairstyles. She definitely rocks the red carpet and inspires women all over the world with simple hairdos like this messy pony with half curtain bangs. 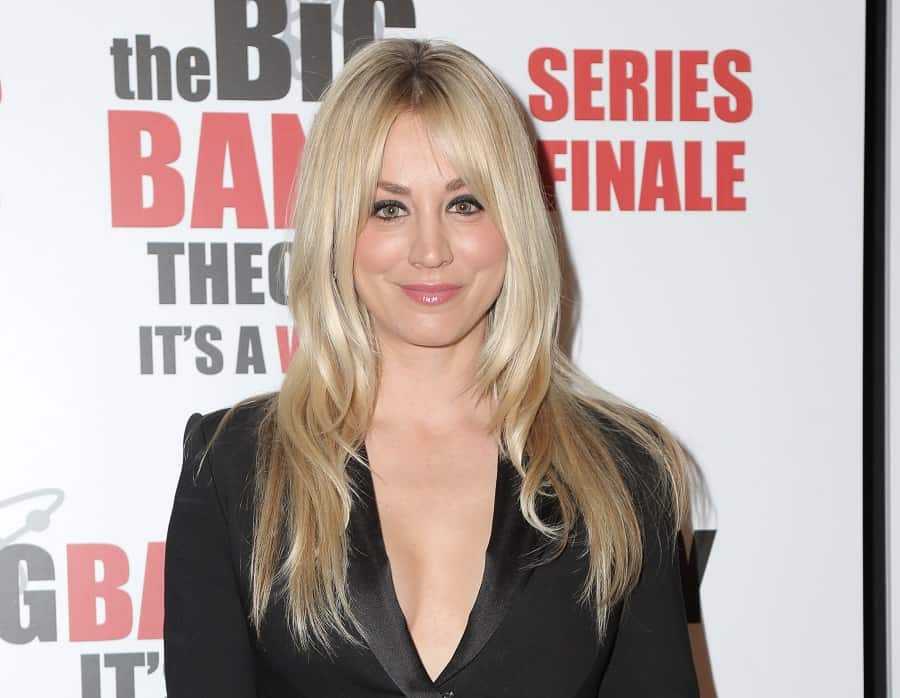 Curtain bangs suit Kaley Cuoco like no other, that’s for sure! She pulls off a simple wavy hairstyle and effortlessly rocks each and every look. For this hairdo, she picked a platinum blonde hair color that suited her fair skin and green eyes and styled a few waves.

To mask those prominent cheeks, the actress from Big Bang Theory was also spotted with hairstyles that involve two thin hairpieces that start from the forehead. These have an important role: creating a great face contour. 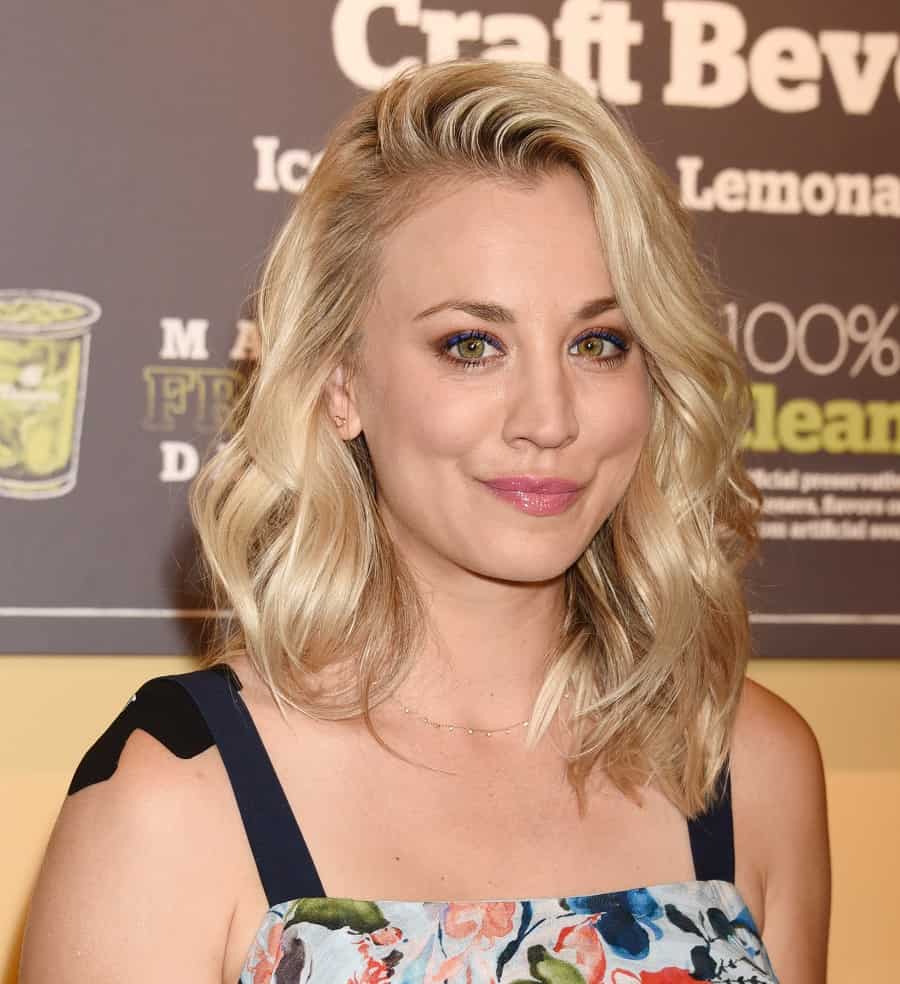 A classical wavy bob is also one of the hairstyles that make Kaley Cuoco look so fabulous whenever she captures the press and photographer’s attention. This time she picked a warm sandy blonde hair color, did a hair flip, and a few waves.

5. Half Up Half DOwn 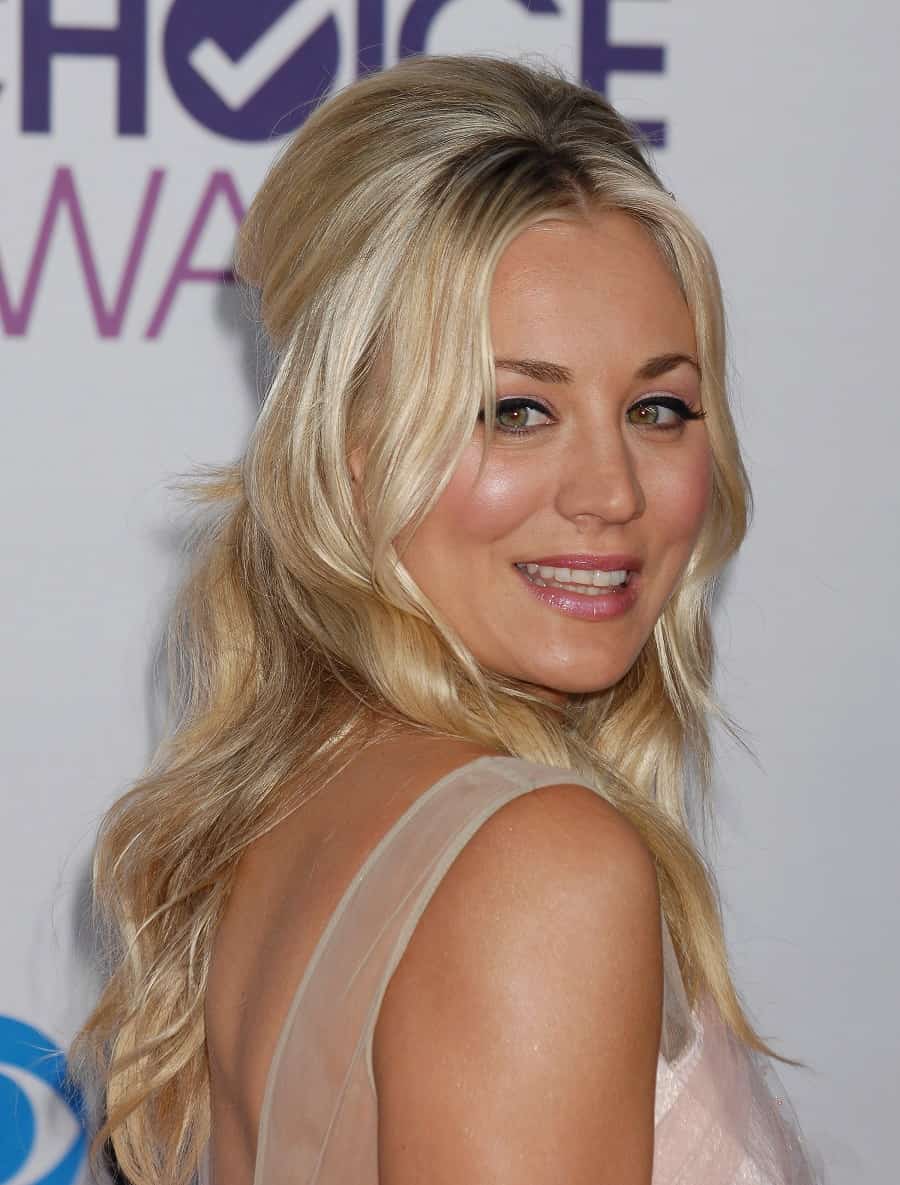 She is certainly one of the greatest inspirations for women who want a simple yet sophisticated look. Kaley Cuoco’s natural hairstyles make her look innocent and sweet, And we have to remark that attention to detail! The waves fall beautifully on the back, and that hair bump provides volume and height. 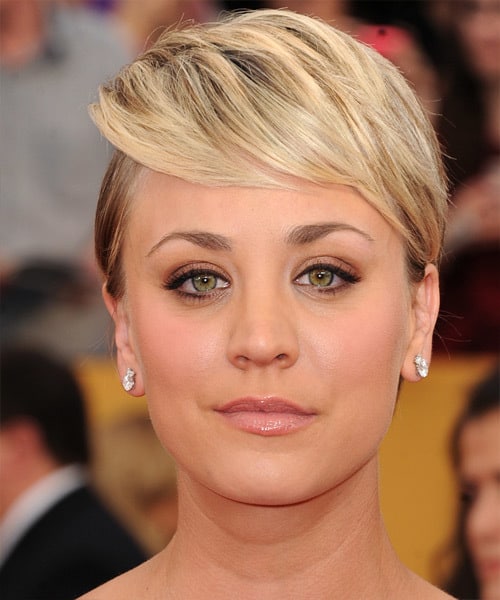 Cuoco is sporting a sleek, layered side-swept bang. The highlights and lowlights give the style some much-needed character as they complement her green eyes.

While this isn’t Cuoco’s shortest hairstyle, this is a perfect alternative for women who are thinking of doing a cut that isn’t as drastic as a pixie. This face-framing, tousled bob is playful, sexy and perfect for a night out on the town. 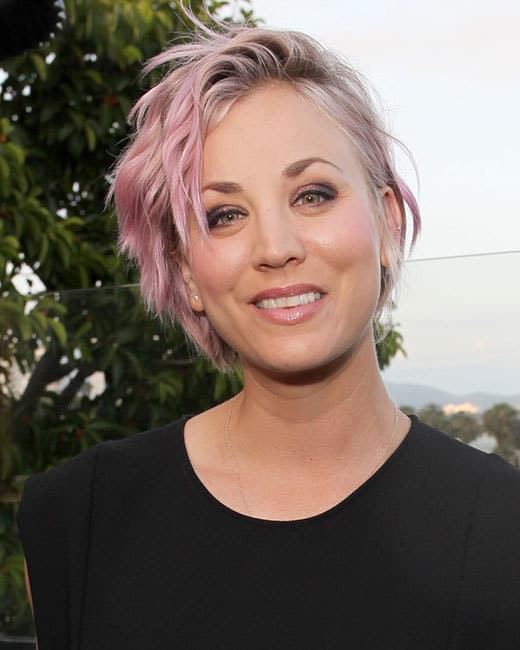 If you’re looking for more of an edgy style, experiment with playful color. Cuoco’s style is full of waves that give off a carefree, semi-bedhead look that’s a perfect choice for a lazy day. 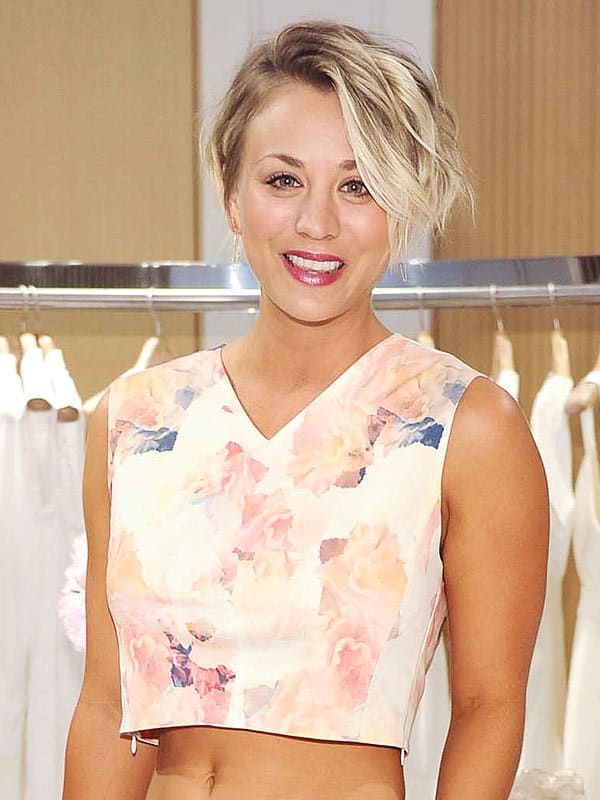 Kaley Cuoco’s hairstylist admits to tapering her hair once she began entering that “awkward” stage of length. By keeping the back short, more of the focus is on the length that the hair is gaining in the front. In this style, Cuoco’s roots are left their natural color while the bangs are highlighted with blonde. The bangs have been tousled in order to give the hair more height and volume, which is a perfect choice for those women whose hair is naturally wavy. 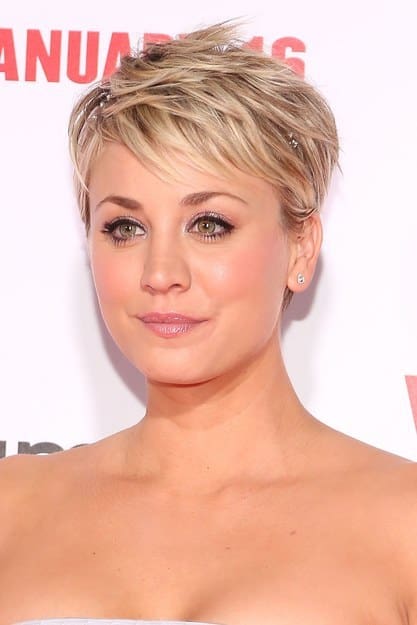 The layers that this pixie contains give the style an amazing amount of movement and character. This is one of Cuoco’s shortest styles, emphasizing her cheekbones and further elongating her neck.

11. Sleek Bun with Shaved side 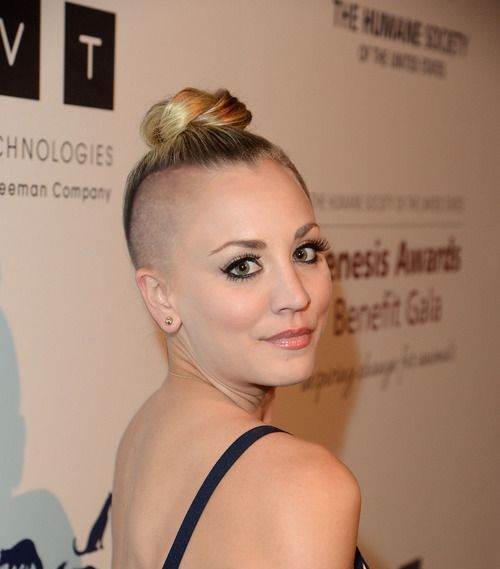 One of the more daring looks of Kaley Cuoco’s short hairstyles, this sleek high bun with shaved side is perfect for any woman with the confidence to rock it. 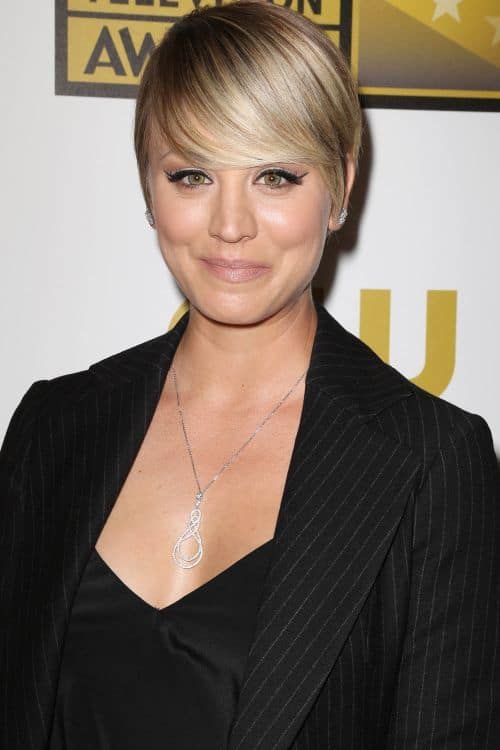 Perfect for the professional businesswoman, this sleek short style features a side swept bang. The subtle layering takes the style from monotonous to marvelous. 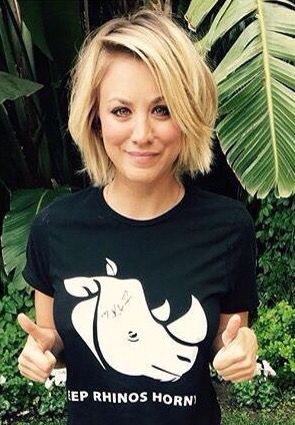 Cuoco’s layered bob haircut frames her face perfectly in this style. One of the best things about this style is its versatility- being able to be styled both professionally and playfully. 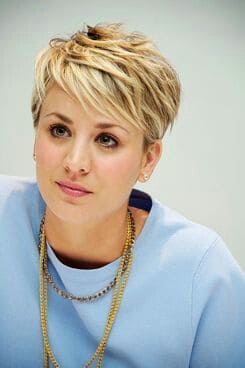 This pixie cut features a longer bang than usual, giving it a particularly funky look. The layers that are implemented gives the style such a tremendous amount of movement that we absolutely love. 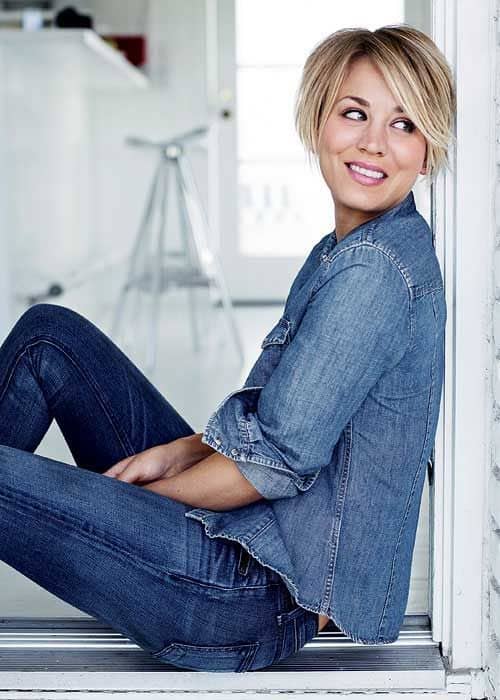 Not many women can pull off this shaggy haircut well, but Cuoco rocks it effortlessly. This face-framing midi bob has been tousled to give the hair a carefree look that’s both playful and sexy.

More Celebrities to get Hairstyle Inspirations: