Scruffy beard is one of those unique beard styles that gives men tough, effective and mannish look despite its rough and wild appearance. It includes less maintenance as compared to other beard styles. Here, you will explore each and everything about the beard to get motivation from the below incredible beard styling ideas, but first, have a look at what the scruffy beard means, exactly?

What Does Scruffy Beard Mean? 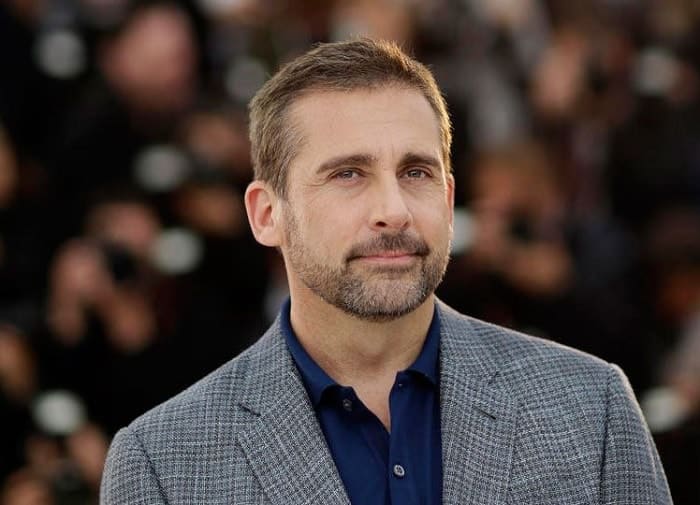 Beard which is kept untidy and shabby is known as a scruffy beard. The definition might create a rough image of the man having this particular beard but you will surely be astounded to know that men having a scruffy facial hair look even more striking and graceful.

How to Achieve Scruffy Beard 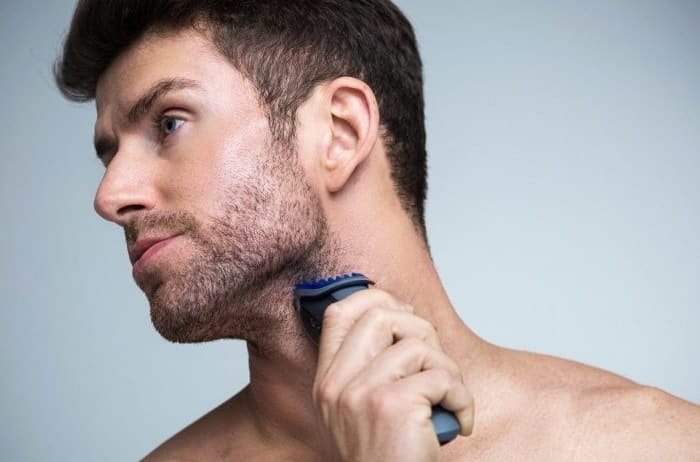 It involves very easy and few steps, which are as follows;

Let It Grow: Grow your beard for at least two to three weeks. Do not do any grooming or trimming during its growing phase. Just comb the beard in a downward direction.

Trimming: Once you achieve the desired beard length after two weeks, trim it carefully and evenly. For the trimming purpose, use a clipper having 5 to 12 mm comb size. Comb the beard during the trimming process for symmetry.

Shape the Cheeks Line: While trimming, you can shape the cheeks line into line up or curve cut shape. You can also keep it natural.

Neckline Trimming: Trim the neckline area from the centre to the outward direction toward the chin and ear zone. Trim the moustache in a downward direction.

Grow Again: After trimming, let the beard grow again. Grow it till you achieve the size approximately 12mm or half inches according to your interest and facial features. You can grow it from full stubble to long beard as you like. 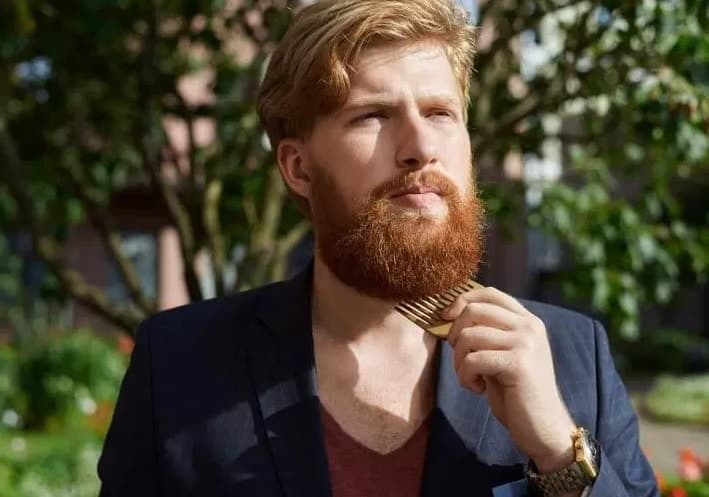 It is really easy to maintain the beard style that involves barely an effort of grooming. Depending on the length of beard, you might need to maintain it after three to four days. If you have light scruffy stubble, it needs daily maintenance for an even look.

If the beard length is longer than the actual length, comb the beard on a regular basis. Combing not only gives you a polished look but also stimulates the beard follicles to release natural skin oil which ultimately makes the scruffy beard, soft texture.

Apply beard oil or gel to nourish the beard as well as to make it a bit glossy in appearance. It is a must to follow step if you are a businessman or going on a formal Meet up.

These most popular beard styles with scruffy look for men that are trending like crazy. 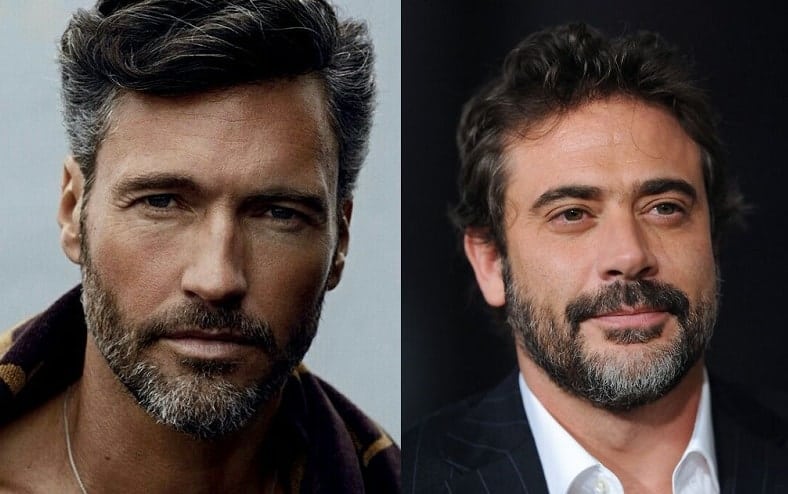 It is one the elegant short beard look which makes the men appearance ultra-mannish and matured. It looks superb with side parting and swept back hairstyle. 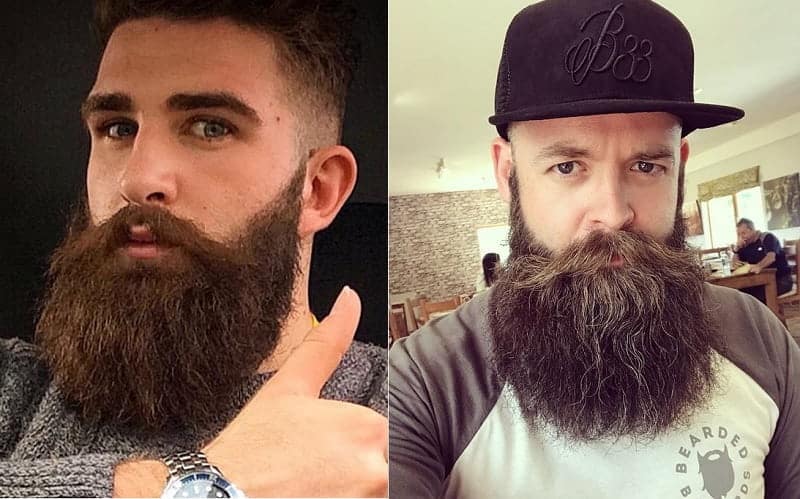 Get benefited from your ability to grow a thick beard. Adapt the above-given avatar for an inspiring and masculine balbo beard look. Do comb your scruffy beard for a well-maintained and presentable look. 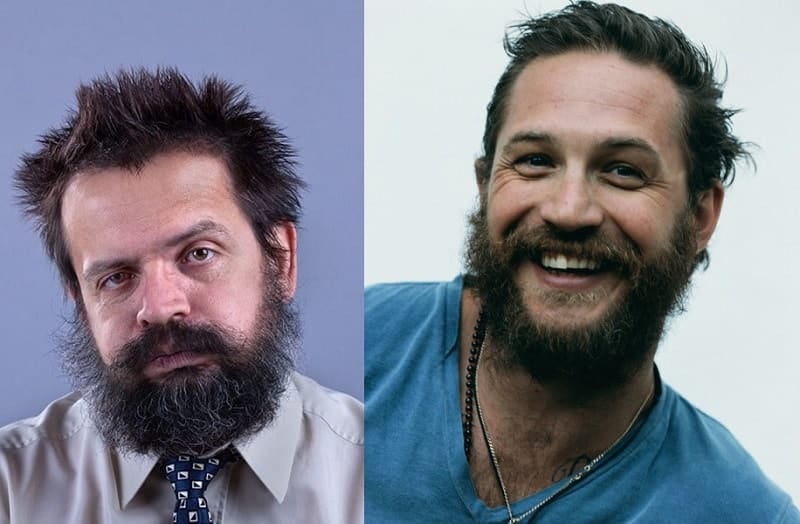 Some guys prefer messy & scruffy facial hair look as it makes them more comfortable than to worry daily about styling themselves. If you are one of them, this beard style is particularly for you.

It may look awkward to some people but if you carry it in a good manner, it will change your look from an exhausted appearance man to cool looking guy, as shown in the above image. 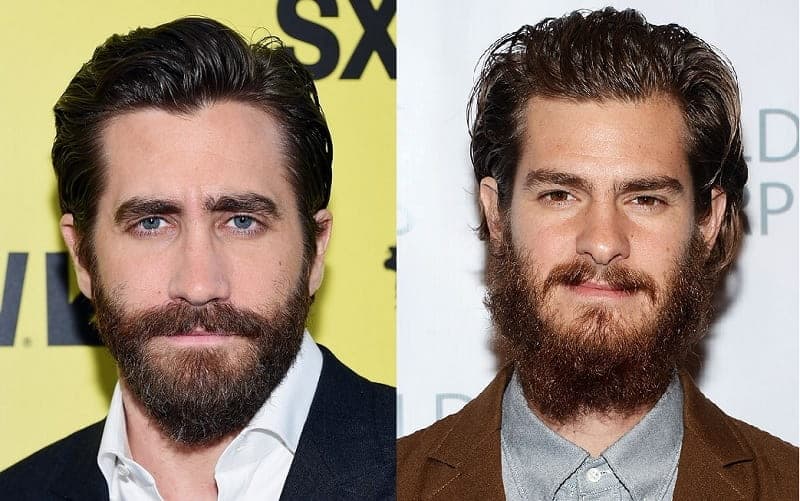 Despite its rough appearance, it will change the men’s personality gracefully depending on the way how you groom it. For example, if you look at the above image of Andrew Garfield and Jack Gyllenhaal’s beard for comparison, the scruffy beard looks more charming on jack than Andrew because of the way he is carrying his beard. 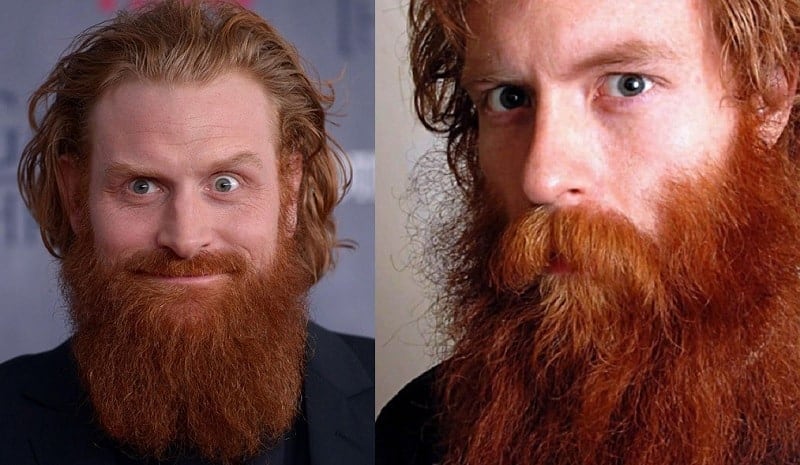 It does not involve any extra grooming; let your beard grow freely. Do not trim it at all. You can trim the moustache but if you want a more aggressive look, you can keep your moustache longer covering your lips. Reddish brown colour makes the whole scruffy look of men more stylish. 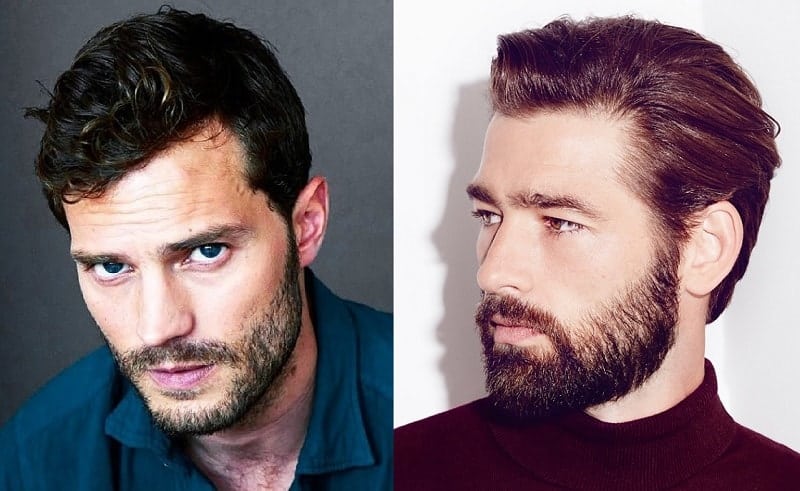 The amazing benefit of growing a scruffy beard for guys having thin hair is that patches do not look weird but becomes the part of the whole style. Trim the cheeks line and neckline area for a neat look. 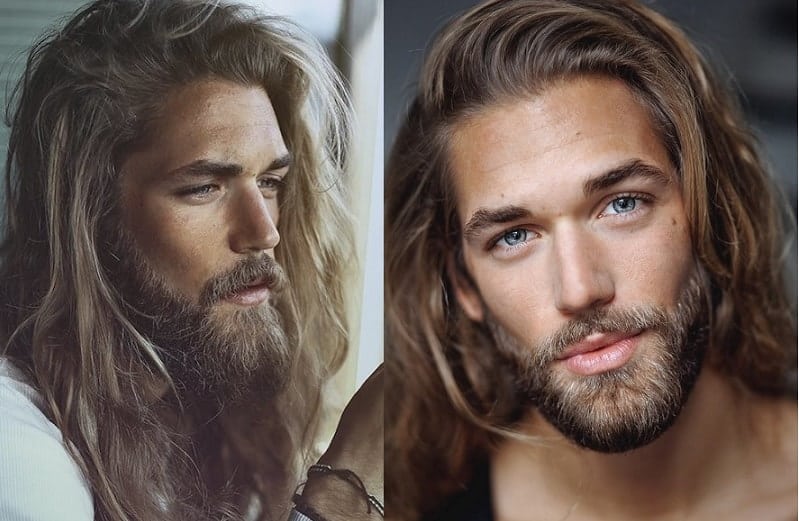 It is one of the most classy beard styles with scruffy look that a man can wear for ultra-promising features. Long untidy hair makes a perfect combo with this beard style. If you have a thick beard, it’s a plus point. Short full beard will give you a bold and manly look. 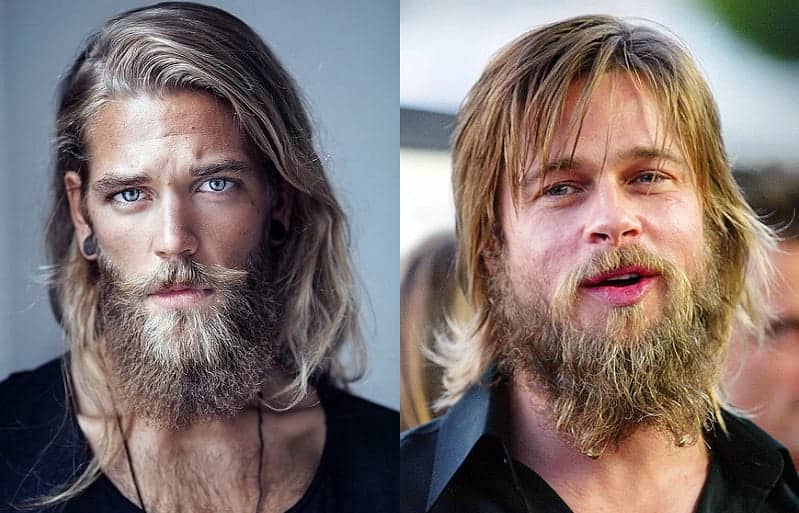 It is surely an impressive way to wear such kind of scruffy beard. The moustache is connected with chin beard which makes a prominent goatee shape. 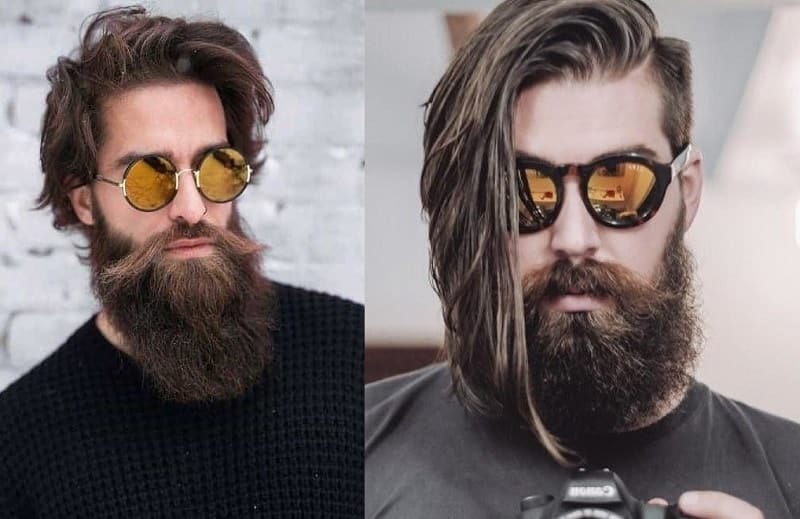 It is a stylish and macho beard style for scruffy facial hair. Do not pay a lot of attention on your beard, work on your moustache instead. Grow your moustache longer and give its both ends a pointed as well as an edgy look. Wear a side fringe hairstyle for an influential appearance. 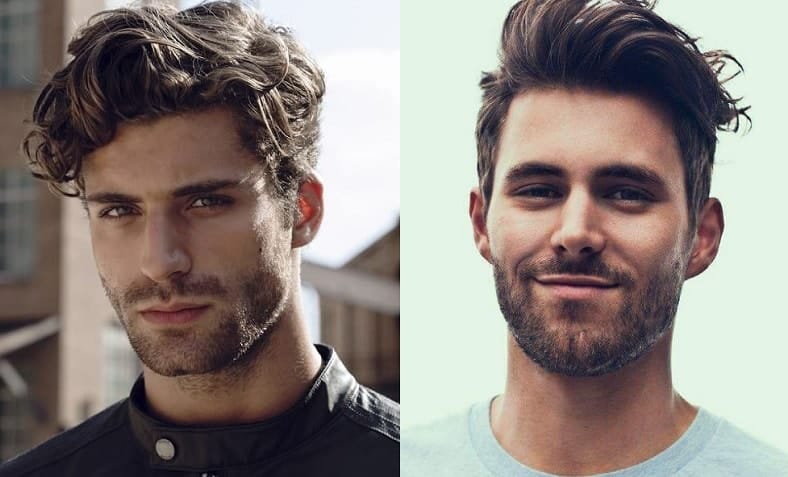 If you are not a big fan of the long beard, choose light scruffy beard style for mature and handsome personality.

Loved every bit of information? We are glad to know that. Scruffy beard is easy to grow but wearing the most suitable style might seem a difficult task. Hope our afore-mentioned beard list succeeded to stimulate you to try at least one these styles. We propose you to choose the style that suits your facial features the most.

I really hate the scruffy beard look that just about every guy is wearing... to me, it looks like the guy is just lazy!

I do love a close-cropped beard, I feel it is a more handsome, clean look.